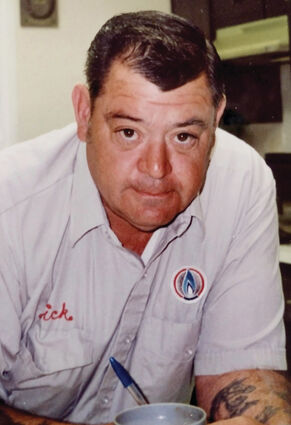 The Emele family, with heavy hearts, announces the passing of Richard Donald Emele, Sr. "Dick" passed away Saturday, July 30th, 2022 at 11:05 a.m., PST, after a long battle with pancreatic cancer.

He served in the United States Navy as a Gunner's Mate and was a Vietnam Vet. This service was followed by jobs ranging from ranching to restaurant dishwasher; he finally was hired by Cascade Natural Gas where he worked for 42 years. His careers lead him from Baker City, Oregon to Ontario, Oregon and finally Shelton, Washington where he retired in 2008. He worked as a Class "A" serviceman and many in the community affectionately referred to him as "The Gas Man". Dick was helpful and kind, and enjoyed life through working with his hands in building and creativity. As a young adult he enjoyed hunting, fishing, and camping with family and friends. He was a master at organizing everything from nuts and bolts to paperwork. Dick enjoyed coin collecting and even tried his hand at making his own cheese and cheese presses. Conway Twitty's "Danny Boy" and "Seven Spanish Angels" sung by Ray Charles were two of his favorite songs. Dick was very generous to his family, not only financially, but through passing on wisdom, insights, stories from "the Old Days" and of course humor.

He will be missed so much by us, his family, but we are confident that he is in a better place; a place of unspeakable joy and reunion to those that passed before him. Our lives will forever be enhanced and comforted by his memory. As per Dick's wishes, no memorial service will be held.