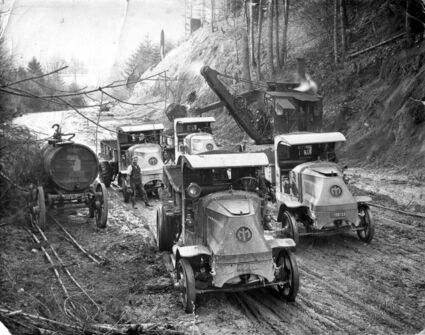 Old 1919 passed away last Wednesday night to the tune of sweet music. Three hundred couples danced at his funeral at the Peninsular Railway Club's 12th annual ball, and eagerly welcomed in the new born babe, 1920. The hall was decorated with a canopy of garlands hung from a large bell at the center. Gay masquerade hats worn by the dancers lent color to the scene. At midnight, the program was suspended while supper was served at the Hotel Shelton. After supper, the dancing continued until the cock crew at early dawn.

Joseph Valley of Matlock was in town Monday, collecting subscriptions of local businessmen toward the extension of the Matlock and Districts Telephone line into Shelton. The contract has been let for getting out the poles and they are nearly all out and strung along the highway from Matlock to Dayton. From there, the present line of the Goldsborough Telephone Co. will be used to town temporarily, until such time as the permanent highway is opened up.

The American Legion is to cooperate with the local Loyal Legion of Loggers and Lumbermen in an effort to connect ex-servicemen in down-Sound cities with jobs in the camps and woods. Providing a sufficient number of positions are open, the post expects to be able to get in touch with unemployed ex-servicemen through the state's Veterans' Welfare Commission.

The first basketball game of the season will be played Friday evening between the Shelton Athletic Club and the Olympia American Legion, at Earlwin hall. The local boys have been busy for several weeks and expect to show the visitors a good fast time. The main game will be preceded by a girls' game between two picked local teams. After the games, a public dance will be given for the visiting team.

Information has reached local authorities of the arrest at Belfair on Tuesday of J. W. Beard, a farmer of the Clifton Valley, by special deputies West and Smith. A search of his place disclosed 13 barrels of "mash" and several bottles of finished product. It is reported that Beard had declared he would not be taken and had started to put up a fight, when one of the deputies anticipated the movement and Beard's jaw was broken by a blow from a heavy gun. Beard was taken to Seattle, and on hearing before a federal commissioner was placed under $1,000 bond.

The state Highway Commission has announced approval of a resolution to improve the portion of the Olympic Highway in Mason County from the Thurston County line to Shelton, a distance of 12 miles, and designating said improvement as Permanent Highway No. 1-B.

Dr. N. E. Roberts, contrary to true medical ethics, has been busy attending himself professionally this week. He is now regretting that in early youth he dodged the mumps.

The loggers are drifting back to town and are seeming anxious to get back to work. The camps are expected to reopen next Monday. Not a few of the boys seem to be as flat broke as ever they were.

From the Stadium correspondent came news that "a fish boat called at the Stadium float and all Stadiumites got a supply of smelt - carrying them home by the dishpan full; Captain Brink and Bob Johnson are building a new floating walk from the shore to the float at the post office. We can now go out to the float without fear of taking a bath in the salt chuck. A crowd of revelers leaving in a launch from a dance at Agate on the night of Jan. 3 got stuck on a sand bar and had to wait till the tide came in before they could go on."