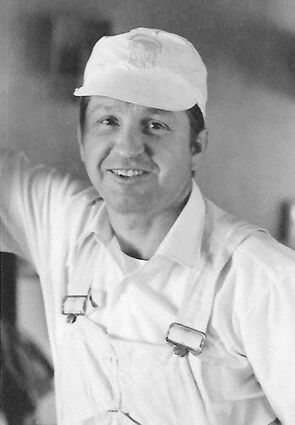 Wentz Otis Eagle, a lifelong resident of Shelton, WA passed away at home Monday, May 2, 2022, at the age of 95. Wentz was born July 30, 1926, in a tent during the time their family home was being built on Hillcrest. He attended Bordeaux Elementary, Lower Skokomish one room school for grades 1-7, Shelton Jr. High and graduated from Irene S. Reed High School in 1944. He started working at 16 driving the milk delivery truck at the Walt Lund and Fourre Farms in Skokomish Valley. After graduation, Wentz enlisted in the Navy, serving as a throttle man on the USS Clearfield, transporting troops in the Pacific during World War II. He began his career as a painter working for a local home builder then Rayonier Pulp and Paper, Simpson Timber Co, Washington Correction Center and the State Capitol Building also privately as"Eagle Painting" until retirement.

Wentz married the love of his life, Eileen Curry on March 24, 1951 and was able to celebrate 65 Wedding Anniversaries with her. He was a hardworking family man with an enthusiasm for life. Wentz was a great example of God's love, serving faithfully in many capacities over the years as a member of the Shelton Foursquare Church. In retirement, he volunteered at the Senior Center as their Tour Van driver and was a member of Mason County Historical Society donating one of his Navy uniforms to display in the museum. Wentz was well known as the "Bicycle Guy" in the Shelton community. He provided several children with bikes. By helping them build and repair their bicycles, he became a surrogate "Grandpa Eagle" to many. He loved to play horseshoes and always had a motorcycle or two around to go for a ride.

A "Celebration of Life" will be held at 2:00 p.m. Saturday, June 4th 2022 at The Pavilion, 190 Sentry Drive Shelton, WA 98584. The family suggests that memorial gifts, in Wentz's honor, be made to the Shelton Foursquare Church building fund or a local charity.