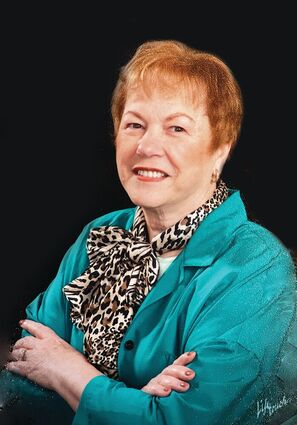 Roberta E. Welch, 86, of Shelton, Washington, passed peacefully at her second home in Eagle, Idaho on April 22, 2022. She died after waging a heroic war against cancer with family by her side. Bobbi, as she was known to all, was the third daughter of Clyde and Laura Wilcox of Shelton, who ran Clyde's Bakery and built and operated the Wilcox apartments on Grove Street.

Bobbi was a very independent child, who grew up exploring her hometown, visiting with its residents and shopkeepers, plotting adventures in the woods and around the creek, and participating in the beloved Forest Festival.

Bobbi had serious baton twirling skills, and proudly marched as a majorette in front of the school band every season. She was a graduate of Irene S. Reed High School and attended Washington State University in Pullman, where she met her college sweetheart and love of her life James P. Welch (Jim), whom she married in 1955, at St. Edwards Catholic Church in Shelton.

The Family relocated to California, a time Bobbi referred to as, "40 years in the desert" happily raising four children. She was a devoted Mom and booster for her children's interests, attending countless, football and soccer games as well as horse shows. As her children grew older, ever the caregiver, Bobbi went back to school to become a nurse and happily worked in a private healthcare practice for many years.

Bobbi however, never forgot her roots and the couple joyfully returned to Shelton in 1996 and built a home on Island Lake. A renovation enthusiast, Bobbi stayed with a friend nearby, walking to the construction site every day, spending hours studying blueprints, and selecting every finish in the home, from floors to tile. Bobbi also designed the maple cabinetry throughout the home which was built over a period of two years by her husband, Jim, in their new home's workshop.

Bobbi volunteered at the local food bank, and served on committees for many memorable Shelton events, including those at the Mason General Hospital. She enjoyed sewing, reading, tole painting, and trying her luck at the Casino. However, her great joy was designing, planting, and caring for her half acre of gardens. Her lake facing gardens were planted by color and included peonies, roses, lilies, azaleas, gladiolas, and lilacs. Her street facing gardens included fruit trees, roses, lavender, dahlias, and a gated raised bed vegetable garden that kept the family in tomatoes, beans, peas, squash, beets, blackberries, and lettuces from spring to fall.

Family was everything to Bobbi and summers at both the Island Lake house and the cabin on Hood Canal were always filled with her children, grandchildren cousins and returning Sheltonites.

A private memorial and internment will be held later this summer.