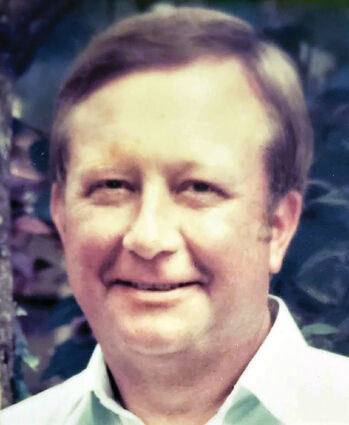 Larry, as he was known to friends and family, was born in Shelton on December 8, 1940, to Chris and Helen Knudsen. In 1957, he moved with his parents to Seattle, WA.

In 1962, he met the love of his life, Kaye Bristol. They were married that same year on December 29 and went on to have three children, Jeff, Lori and Kathy.

Larry had a long career with Lumbermen's, starting his senior year in high school when he went to work for Lumbermen's in Lynnwood. He then transferred to the Shelton Lumbermen's as store manager in 1968. He was promoted to company President in 1973 and finally retired from Lumbermen's in 1984. He then went to work with a good friend developing Super 8 Motels in Washington, Oregon and Alaska. He retired in 1999.

During his retirement, he loved developing their five-acre yard. He grew hundreds of annuals, from see, every year to fill up his yard and he loved to grow Dahlias. He had Dahlia beds that lined the property with bright, colorful blossoms every year. He gave away cut Dahlias and Dahlia tubers to friends, family and anybody who wanted them. He also enjoyed RV'ing, traveling with friends to California, Arizona, Canada and Alaska, playing lots of golf along the way. Larry and Kaye went with friends to New Zealand, twice, both times with golf clubs. They also made several trips to Hawaii with friends and always brought their golf clubs. He also enjoyed spending time with his family and loved extended family get-togethers.

Larry enjoyed all types of fishing. On the lake, or in the ocean on his boat, or standing on the bank of a river, he loved to fish! He prepared many fish dinners and he smoked a lot of salmon for family and friends to enjoy.

Larry was an honest and caring man. He was compassionate and generous and he lived his life with great integrity. He was admired and loved and will be missed greatly.

Larry was predeceased by his brother, Don Knudsen and his wife Margie, by both his sisters and their spouses, Viola Hanson and Paul, and Helena Gohrick and Ken. He was the last of a generation. He is survived by his wife Kaye, and son Jeff Knudsen and wife Barbie, his daughter Lori Knudsen, and his daughter Kathy Saka and husband Martin; and also, his Danish daughter, Dorthe and her family in Denmark; seven grandchildren and numerous nieces and nephews.

Services will be held at a later time. In lieu of flowers, the family requests that donations be made to Mary Bridge Children's Hospital of Tacoma, Washington.