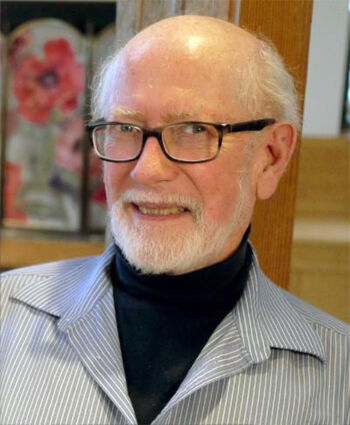 John E. Dunlap, 89, died peacefully on December 28, 2021, after a struggle with Parkinson's disease. John was born to Edgar and Helen Dunlap on Oct. 26, 1932, in Great Falls, MT. After graduating from high school in 1950, he enlisted in the U.S. Navy, then was stationed on Adak Island in the Aleutians as a monitor of Russian radio transmissions during the Korean War.

When his enlistment was complete, John returned to Montana, attended the College of Great Falls, and in 1955, transferred to Montana State College in Bozeman, to pursue his architectural studies. There, he met his future wife, Pat Humphrey, an art major, when both had roles in a college production of Arthur Koestler's Darkness at Noon. Not only was it the beginning of a relationship, it commenced their lifelong interest in theatre.

After marrying in 1956, John and Pat attended the University of Oregon in Eugene, then moved to Seattle when John was hired as an architect at Boeing. For the next several years, John and Pat each pursued pottery and painting as hobbies, then decided to commit themselves to full-time lives in the arts. In 1969, they sold their home on Queen Anne Avenue in Seattle, bought a camper, and moved to Harstine Island.

John and Pat founded The Harstine Island Gallery, later built a home overlooking Puget Sound, and each pursued their individual professional careers, he as a potter, she as a painter. They were active members of the Harstine Island Theatre Club, and their favorite vacation was to attend the Shakespeare Festival in Ashland, OR. Their lives were further enriched in 1986, when they welcomed 10 year old Tammy Taecker into their lives and later adopted her.

In 2009, John lost his wife of 52 years, then was devastated by the untimely death of Tammy in 2018. He is survived by a granddaughter, Audrey, of Seattle, and by his much loved son-in-law, Blaine Carpenter.

Among others John left behind are Malin Almroth, who not only was a caregiver but a devoted friend; Bob and Sonia Cole, his loyal next-door neighbors, Patricia Calvert, his sister in Rochester, MN., and Peter and Tamara Allison, who provided outstanding hospice care for John at their home in Puyallup during his final 2½ months.

A celebration of life will be held at the Harstine Island Community Center on a date to be announced. Lunch will be served, and all are welcome to attend and share memories and fellowship.

Donations are welcome to the Harstine Island Theater club in John's name.