Board planning meeting with Skokomish Tribe 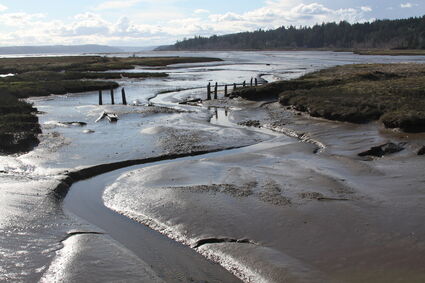 A creek flows into Lynch Cove on Monday alongside the Theler Wetlands trail in Belfair.

The North Mason School Board hosted a public hearing Feb. 17 to discuss the proposed transfer of surplus Theler Wetlands property to the state Department of Fish and Wildlife.

Board member Leanna Krotzer read an opening statement for the public hearing, stating that any land transfer, the district will retain the right to use the classroom space and use the exhibit center for school-related purposes. It would also be subject to the public's continued use of the trails and property.

There was no action taken at the meeting and action is planned on the property transfer at a later meeting.

"I think this is going through a thorough exam internally. I can't say I'm the representative of WDFW, that's levels above me, but I have been working on this project," Woodruff said. "I view it as a win-win. I think a lot of the points that have been brought up are spot on. It's not to take away anything from the community, but it's to contribute, add and be a benefit to the community."

Hope Hutsell lives in the North Mason School District and said the district has ignored its obligation in government-to-government relationships with the Skokomish Tribe. Hutsell said the tribe has legal and usual accustomed rights on the land and water and it is the tribe's ancestral homelands.

"The invitation to involve tribal governance in this meeting came too late to honor governmental due process with only seven business days between the invitation and this meeting tonight," Hutsell said. "This situation where I, as a settler, have more voice and ability to speak than the tribe as a government entity, shows the ways that settler colonialism imbedded in systems at North Mason School District inhibit expressions of tribal sovereignty as I speak. I would say that this cannot be defined as a public hearing while ignoring tribal sovereignty in this matter and excluding tribal voices through a lack of due process. I strongly encourage all organizations involved to prioritize government-to-government relations with the Skokomish Tribe and consider your legal obligations to treaty rights."

Rosenbach said she has received communication from tribal leadership to request a government-to-government meeting and is in the process of scheduling a meeting with the school board and leaders of the Skokomish Tribe.

North Mason resident Herb Gerhardt said he is in favor of the transfer of the wetlands to WDFW. He said he does not want to lose local control over the trails and wants the land transfered as soon as possible.

North Mason resident Jana Peterson asked if there was any plans to build on some of the land that is available and Rosenbach responded by saying the school district is retaining the upper 5-acre portion from Mary Theler's will and the other wetlands area is not a place to build a school because of environmental reasons. Peterson said she's worried about vehicles inhabited by homeless people parking near the school. She said she worries that the parking lot might become a place for loiterers.

Robin Cockrel, who works with the nonprofit Barnacles and Bees, which runs an outdoor program out of the Theler wetlands and leases the educational center, said it has been a pilot year and "it's been amazing to be in that space." Cockrel said she is in favor of options to replenish the areas that need help on the boardwalk and structures, and care and tending for the land that is too much work for one person.

Rosenbach said the cost of upkeep is beyond what the district can do.

Someone asked if the park will require a pass if it's acquired by WDFW or if it will still be free to the public. Rosenbach said those concerns have been raised during discussion but there has not been a definitive answer to that question.