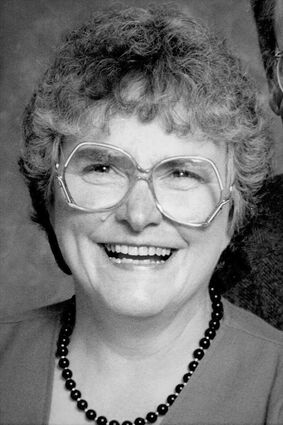 Catherine (Cathie) L. Rhodes was surrounded by family when she was called home by the Lord on January 12, 2022. She was 89 years old. Cathie was born and raised in Olympia, Washington and graduated from Olympia High School in 1951. She attended Central Washington College of Education (CWU) graduating in 1955 with a degree in education.

Cathie was a member of St. Edwards Catholic Church where she spent many years involved in the Altar Society. She was a founding member of the Rainier Guild (affiliated with Seattle Children's Hospital) and was a member for over 60 years. She cherished her Guild friendships as well as those made through her bible studies over the years. When she came to Shelton, she taught one year of kindergarten in Shelton Schools before staying home to raise her children. After her youngest entered school, she became a grade school substitute teacher which she enjoyed for many years.

Being a grandparent was the highlight of her life. She enjoyed everything that involved her grandchildren including picnics, bonfires, making cookies and gingerbread houses, playing dice and games, and traveling to see her out of state grandsons. Camping at Kalaloch is an annual family tradition that she enjoyed for over 50 years. Her children and grandchildren love carrying on this tradition. Her many friends rounded out her life and she appreciated the time spent with them.

She is survived by her children: Teri (Kip) Whitehead, Cami (Kris) Anderson, Juli (Mark) Tuson, and Todd (Jackie) Rhodes. The joys of her life are Branden and Kevin Whitehead, Cali and Zach Anderson, Tanner and Evan Rhodes, and Nicole Tuson. Cathie also leaves behind a brother Edwin (Donna) Metcalf of Olympia as well as many nieces and nephews.

A service will be held Friday, January 21, 2022, at 2:00 p.m. at St. Edward Catholic Church, 601 W 'C' St, Shelton. Masks are required and there will be no reception, due to Covid. In lieu of flowers, the family suggests donations to Seattle Children's Hospital (seattlechildrens.org/giving/donate) or your favorite charity.

"A mother's love is alive forever, in the lessons she taught,

the patience she gave, and the hearts of the children she raised."