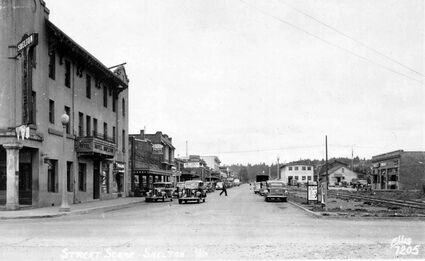 Railroad Avenue as it looked when Roberta was a little girl.

Part 1 of a two-part series.

This story was discovered in a notebook titled "Irene S. Reed Class of 1953 Essays on Growing Up in Mason County." Several members of the class submitted stories, written in 2006-07, and they are all fascinating.

Roberta Wilcox Welch wrote 31 pages of memories of her life in Shelton in the 1940s and '50s, providing the most detailed look into the past. Billie Howard, "director emeritus" of the Mason County Historical Society and herself a 1953 Shelton High graduate, is still in touch with Roberta, who lives near Shelton, and believes she would be happy to see her story in the paper.

"About the time I was born, my father finished building the Wilcox Apartments on Grove Street. When I was about 1 year old, we moved into a new house behind the apartments. One day a black and white, wire-haired terrier showed up at our house. Dr. Jim Morrisey and his wife Alice, who lived in our apartments, were about to move into a house nearby that my dad was building for them, so they took 'Mick' to live there. Mick had a great attachment to my dad and followed him constantly, even up ladders.

"The Morriseys fenced their backyard, but that did not keep Mick in. Sometimes he would trek down to Roy McConkey's drug store and lie in front of the door, making it difficult for customers to get in. Roy would put some vanilla ice cream in a small white carton with a wire handle and give it to Mick. He would carry it home by the handle, jump over the fence, and then proceed to tear the carton open and eat his ice cream.

"We had a handyman, known as Shorty, who helped around our house and the apartments. He always seemed to be digging, and threatened to bury my cats. Once my fear of him was overcome, he became my first friend. When he wasn't digging in our yard, he was in one tavern or another, especially Mac's Corner. My dad used to dole out Shorty's pay so he could not drink too much at a time. It angered Dad that the police always looked for Shorty to pick up on a drunk charge when the lawn needed mowing at some city building or the county courthouse.

"I recently visited the Post Office in Shelton and I was worried that the mural would no longer be there, but the large mural of a logger with oxen pulling logs down a logging road is as beautiful as ever. As a child, I always wanted to go in to see it.

"Other memories were also awakened that day, especially of the effects of World War II on Shelton. The Post Office lawn was the site of huge plywood billboards painted white and lettered in black with all the names of Mason County servicemen. Perhaps there were women, too, I do not remember. They were listed by branch of service. Those wounded or killed were so marked.

"The war was a very unsettling time for children. We were warned not to approach downed balloons, as they might be rigged with explosives. I remember the neighborhood sand bins with buckets, and the air raid warden who would come around and tell you to pull your curtains if your lights were showing from the outside. There were so many unknown and imagined horrors connected with the war.

"Riding the ferry from Bremerton to Seattle was very strange. There were submarine nets across the Sound to protect the Navy base. My dad said they were like great big underwater fence gates. There was a point where the ferry would throttle back and sit in the water while the nets were opened and we could pass through.

"My aunt and uncle from Seattle were going to take over an oyster-growing business on the bay for the Olympia Oyster Company because the Japanese family that lived there had been interned at the start of the war. I went out to see the place with my Dad. There was a huge pile in front of the house of various household items left behind in haste. That had a profound effect on me. I was too young to know about rights, but I knew a great deal had been stripped from those people. For many years I kept a teapot with a bamboo handle, no lid.

"Leather was rationed. We wore wooden clogs and shoes with imitation rubber soles that left black marks on the floor. We saved grease from cooking and turned it into the meat market. It was supposed to be used in the manufacture of ammunition. We also saved tin foil and cans.

"There was precious little candy or gum to be had. For a while my dad ran the PX at the Navy airbase, which is now Sanderson Field. Not only did they have candy and gum, but the place was overrun with men who were lonely for their kids and would love to supply a little girl with candy. This was the only exception to the

"My sister Pat graduated from high school in 1943, when I was 7. I remember going to her graduation in the gym and seeing the scattering of

empty chairs on the floor. Some of the boys did not wait to graduate before going to serve our country. Their classmates set a place for them anyway. Some of those chairs held fringed satin pillows with the name of the branch of service of the absentee graduate."