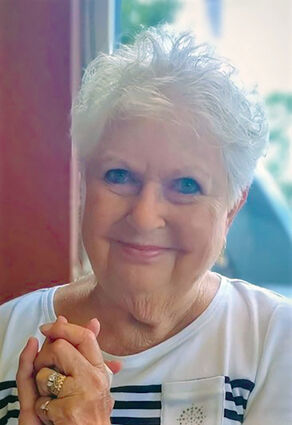 "Because you lived, the world is a much better place."

With a heavy heart we announce the passing of our beloved mother and dear friend, Nancy S. Cornehl. Nan was born in Seattle, Washington to Buster and Kathleen Sunde, on October 5, 1935. Nan passed away early December 26, 2021.

Nan attended University of Washington and met her former husband James Petersen before moving to Pasco, Washington. Nan and Jim raised five children which kept Nan very busy. Nan also used her artistic talents to paint windows at Christmas and her skills as a seamstress to duplicate designer dresses for her friends. Nan started modeling doing tea room, runway and commercials for Young's of Pasco and Piro's.

Nan was strong in her faith to the lord Jesus.

Nan was remarried to Howard Cornehl (pre-deceased 2021) on August 27, 1976. Howard and Nan were often mistaken for Doris Day and Johnny Carson. They were always so full of fun and laughter, dancing away the nights and spending time with their good friends.

They moved to Issaquah and Nan went to work starting as Payroll Director at Sterling Recreation moving quickly into human resources. Nan was offered a position at Olympic Stain and shortly afterwards she was promoted to Director of Human Resources. While at Olympic Stain, Nan had a fantastic idea and when presented to her boss, the CEO, he thought she had temporarily lost her marbles. Who would want a membership at a warehouse as a benefit? The CEO decided after much persuasion to offer this membership to the office personnel on a trial run. It was a huge hit and then they offered all employees the benefit for employment at Olympic Stain. The name of that warehouse was Costco. This was the first Costco in 1983. Olympic Stain was sold to PPG in 1991 and Nan stayed to see the transition through and retired shortly after. Nan was highly respected in the corporate business world and was known as a mover and shaker. If you wanted something done, just ask Nan.

Nan was very passionate with her political views. Sometimes these opinions differed among the family. In one instance after a surgery, Jeff went to check on her. The first thing she said, to Jeff, was "I can't believe that ... voted in support of ...." He turned to the nurse to get her calmed down and the nurse said "well, her blood pressure is a little low and this may help"!

Nan was extremely talented in many areas. She was known as an extraordinary cook and enjoyed archery, tennis, bowling, entertaining, dancing, gardening, candy making, artistic hobbies and was an equestrian hobbyist.

Nan and Howard retired at Lake Limerick in Shelton where life was a little slower on the golf course. They made many wonderful friends over the years and enjoyed spending time with them playing mahjong and cards. She was famous for her Norwegian hotcakes, a family tradition passed down and a treat all of the family enjoyed.

Nan was a good life teacher. The most valuable lessons she taught was to never to hold a grudge. Nan said grudges are silly and life is short. She knew. The other was not to lie. Nan said lying won't get you to heaven and when you get older you'll forget what you lied about anyway, so everyone would know.

Nan faced numerous health challenges and never complained. She always said "Oh well, there is always someone that has it worse" and proceeded with a story to support this statement. Erik perfectly described her calling her a "Badass". Bonnie, one of her special friends, quotes "I have never met anyone who suffered so much loss, as well as so many medical problems and never complained. She was truly a gift to us".

When Howard died her friends rallied and made sure to help her stay in her home by helping in any way possible, and the list is extensive. Erik and Elisa became her valuable health advocates.

Memorial date will be held later in 2022.