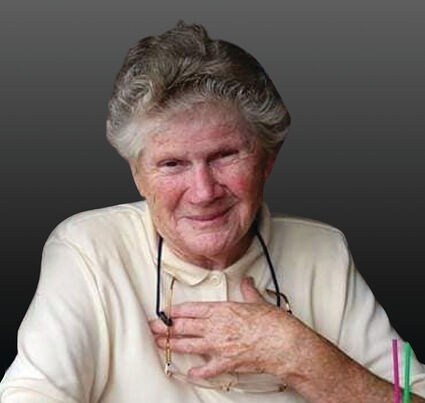 Dolores "Doris" Julia Schultes Olson was born April, 1925, and passed away December 17, 2021, at home surrounded by her loving family. Doris had always been healthy and active until suffering a massive heart attack on November 19, 2021. She managed to stay with us for a month, fighting through the pain, just to be with us.

Doris was the second of nine children born to Lola (Loeb) and Leon Schultes. Her siblings Wava, Leon, Donald, Peter and Jackie preceded her in death.

Doris was born in Crow Wing County, Minnesota. She was delivered at home by her father. Doris' family moved to the Northwest after the attack on Pearl Harbor in 1941. They wanted to help in the war effort and Boeing was looking for workers. Doris was an actual "Rosie the Riveter:. She worked for Boeing for several years as did her Mom and sister, Wava.

She also met her future husband, Vern, in Seattle. He had enlisted in the Navy and was stationed in Bremerton. They were married shortly after meeting at a USO dance.

Doris had the greatest sense of humor, best laugh and remarkable memory. She was definitely one of the "super agers" whose mind was remarkably clear at age 96. Doris will be sorely missed by her family and friends.

Doris was the most wonderful Mom, Mother-in-law, Gramma and Great Gramma, second Mom, and doggie Gramma there ever could be. We will never forget what she meant to us and all the things she has done for us. There is a great big empty space that we must now fill with memories.