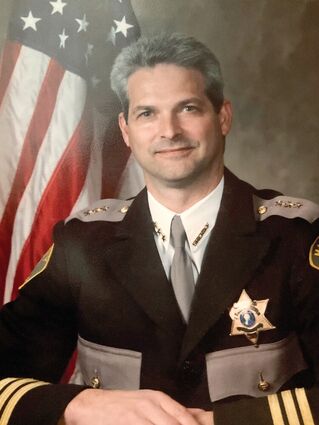 Steven Craig Whybark passed away peacefully at home on December 18, 2021. He was born on October 8, 1952 to Quentin and Catherine Whybark in Seattle, WA, and lived in Bremerton, Washington throughout his childhood. He has two siblings, a brother Doug Whybark and a sister, Ann Whybark. He attended and graduated from Bremerton High school where he was a gymnast. He attended Olympic College.

He married his high school sweetheart, Lori Huntley and they made their first home in Pullman, WA in 1972. He went on to get his degree in Criminal Justice at Washington State University. They moved back to Kitsap County after graduation and he started his law enforcement career in Security Services at Bangor Naval Base. He was hired by Mason County Sheriff's office in 1978, where he was a corrections officer, patrol officer, narcotics officer, a homicide detective and became the undersheriff and eventually the sheriff of Mason County for 12 years. He was a strong leader in the community through coaching sports and spending time with his children, Jeff Whybark and Bree Whybark and their friends. He helped to open a volunteer sheriff's office in Belfair and a Boys and Girls club in the community. He connected with many people and made a lasting impact. The North Precinct office is named in his honor.

One of Steven's greatest joys was his three grandchildren, Stephen, Emily and Dean. He was a constant spectator at their sporting events and loved playing with them out on the big lawn or in the water. Steve and his wife, Lori enjoyed swing and ballroom dance. He was known in Mason County as the "dancing sheriff" and taught dancing at many charity events. Steve and Lori attended many Jazz Festivals and loved to attend monthly Winter Club events and Elks club with their wonderful dancing friends. He lived on Kitsap Lake for most of his life and he thoroughly enjoyed fishing and boating. He would catch fish for the eagles and call the eagles in to swoop up the fish and eat them in the big tree by the house. He took his family on many trips when his kids were young in their travel trailer and made many lasting memories for his family. He and his wife enjoyed cruising and traveled to Hawaii, Mexico, Bahamas and Europe. He enjoyed gambling and almost always came away a winner. His karma was apparent during his casino visits. He retired in 2006 after a diagnosis of Parkinson's made it difficult to serve his community the way he would like. He worked after retirement for an emergency mapping company which helped to teach businesses how to deal with active shooter situations. He also worked for the Kitsap County courthouse in security.

Steve was blessed by having a loving family care for him at home during his battle with multiple myeloma. He was cared for by his sister, Ann Whybark, brother, Doug Whybark, daughter, Bree Whybark, Son, Jeff Whybark and Jeff's wife, Stephanie, and his wife Lori Whybark. He was surrounded by love in his last days with his family and friends.

He is survived by his wife, Lori, children; Bree, Christopher (son in law), Jeff, Stephanie (daughter in law) and grandchildren; Stephen, Emily, and Dean. He is also survived by his brother, Doug (wife Sherry) and Sister, Ann and brother in laws Mike (wife Tracy) and Rick wife Lisa) and Father and Mother in law, Howard and Terry Huntley.

To know Steve was to love Steve. His generous and caring nature was inspirational to many. His quick wit and one-liners endeared him to his many friends and family.