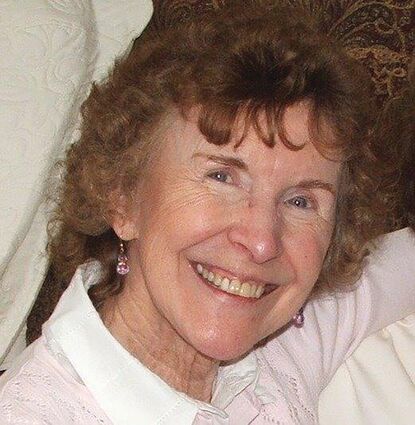 Judith Mary (Webb) Lloyd, 83, of Shelton, Washington, passed away on December 11, 2021, surrounded by her eight children and husband, Loren. "Judy" was the eldest of three daughters, born on September 30, 1938, to Mildred Bebich (Webb) (Cundari) and Arden Ellsworth Webb in Salem, OR. Judy, and sister's Rachelle and Kathleen, were raised in Olympia, WA. Judy spoke fondly of their home in Butler Cove, nestled in the trees on a cliff overlooking the bay. She often recited a poem her father wrote in which he described this magical place filled with pine trees and ferns. It was here she grew to love both the woods and beach.

Judy was a graduate of Olympia High School and Grays Harbor College. She also attended Washington State and Seattle University where, as a violinist, she immersed herself in music, a passion she shared with others throughout her lifetime; Judy enjoyed performing in local theater, chorales, and sang in her local parish.

Judy married Doyle Douglas Dunaway on July 22, 1961. They had eight children: Damon, Teresa, Maureen, Albie, Jennifer, Marc, Hollie and Cassie. As a single mother, she was a masterful administrator of this bustling household, yet always made time to grow and explore new passions, including theater, karate and dancing. Her first love was her faith, and this faith only grew stronger through times of adversity.

Judy met and married the love of her life, Loren Lloyd, in 1988; together they built a loving partnership, and, for 23 years, ministered to their community through their Catholic book store, Bread of the Presence. Their family grew to include many grandchildren--Zachary, Taylor, Jaime, Marcus, Megan, Rachel, Eli, Emma, Millie, Ava, Esme and great grandchildren, Aiden, Konnor, Guy, Mabel and Hank.

Judy was especially beloved for the kindness she bestowed on customers of her bookstore, always with a singular attention to detail. She selflessly ministered to those who wandered in, often lost and in search of comfort, offering words of wisdom and peace. This space became a gathering place where Judy and her dear friends would enjoy tea parties and come together in prayer for those in need.

Judy was a light in this world, funny, generous, and kind; she possessed a gentle spirit, yet an unwavering moxie. She had an uncanny ability to see the world through rose colored glasses. She cherished her children, covering them in constant prayer; she was a faithful friend and a devoted wife. She was truly a grace to those who knew her.

A funeral Mass will be held in her honor on Monday, December 20th at 12:00 p.m.(rosary at 11:30 a.m.) at St. Mary's Parish in Aberdeen, WA. A graveside service at Fern Hill Cemetery will follow.