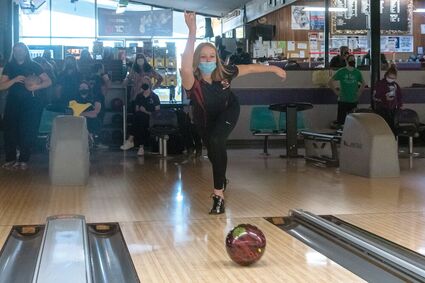 Shelton's Audrey Knauf holds the follow through as her ball rolls down the lane during an Evergreen Conference bowling match at Westside Lanes in Olympia on Nov. 23.

The Shelton girls bowling team lost to an excellent Black Hills team 2,191-1,219 in an Evergreen Conference match at Westside Lanes on Nov. 23.

"This one went exceptionally well," Shelton coach Jennifer Deyette said. "We were missing some of our regular starters and missing some of our bowlers completely so we shuffled some girls around and they absolutely stepped up. Our varsity first game was the highest team total we've had so far this year."

Deyette said Joyner stood out in this match, bowling leadoff for JV normally but was called up to varsity today and she was the top bowler for Shelton. She also highlighted Marsybel Zacarias on the C team, bowling a 92 and 11 in two games and Abbie Hirzel on JV, bowling an 88 and 120 in two games.

This is Deyette's second season coaching the bowling team and she said it is a lot of fun. Shelton has played three matches this season, including a loss to Rochester, 1,198-1,151, and a loss to Tumwater, 1,677-1,261.

"We had some return and one not return so we have a lot of new bowlers," Deyette said. "We have a lot of girls who have never bowled before and so we focus on getting better and getting their average and they're all improving. Some of them have already improved their average by 20 pins."

Deyette said Joyner has been the leader on JV and her attitude has been great in keeping the team's spirits up. She said Knauf is a natural leader, and Camilly Crow and Moore are silent leaders.

"I was really concerned, a lot of coaches talked about not being in-building, which I'm not in the building with the high school," Deyette said. "And not having as many girls and we actually had 24 signed up at one time. Some of those girls just couldn't get their physicals or had to make another commitment but 15 solid is such an improvement and it's making a difference. We're enjoying the team this year."

With no bowling alley in Shelton, the team practices and plays most of their matches at Westside Lanes in Olympia. It is also the home for Black Hills and Tumwater due to the closure of Tumwater Lanes

"The positive is most of our matches are here at Westside Lanes, whether we're the home team or the visiting team so the girls will get used to the lanes, that's actually to their advantage," Deyette said. "The disadvantage is we travel every day for practice and for a match so we don't get as much practice time as other teams or even as other sports and we have to leave early for every match, not just for away matches. So academically, ourself and myself as a teacher, we're missing class time."

The EvCo will be excellent once again this season, with defending state champion W.F. West along with individual champion Hallie Stuart and 10th place finisher Zoey Theophilus from Black Hills. Theophilus bowled a 223 and 184 in her two individual games and Hallie recorded a 206 and a 209.

"We have Rochester in the league as well which they were last year but they didn't have a bowling team. Our first match against Rochester, had we had a strong baker first game, we could have won," Deyette said. "We haven't bowled Aberdeen yet but we're usually pretty competitive with Aberdeen. It looks like the same top two, Black Hills and W.F. West. I actually think Black Hills might overcome W.F. West this year."

Deyette said the goal for this season is to have fun, to learn and not get down on themselves.

"Bowling is such a mental game and girls can be so negative on themselves," Deyette said. "We're just really focusing on keeping themselves up, throwing away the last frame or game, restarting, resetting and just trying to shoot for their average."

The North Mason girls bowling team features a lot of youth and some experience, but the Bulldogs are excited about the 2021-22 season.

Coach Rob Thomas said the team has two returners in seniors Joey Knoth and Emma Plass and both will be leaned on for their leadership. The Bulldogs also have some up and coming young bowlers in Lilian Block, Emmalei Byee, Audrey Johnson, Kaitlyn Kamphouse, Isabella Oblizano, Jesslynn Thomas and Jordan Young.

North Mason had one of its highest turnouts for bowling with 21 girls participating. The team struggled to get girls to join the team during the COVID season and in years prior to the pandemic, had around seven girls on the team in an average year.

"It is very exciting to see so many girls coming out and joining the Bulldogs," Thomas said in an email.

The team has played a few matches and Thomas is a new coach, but he said it appears Klahowya is the top team in the Olympic League.

The expectation for this team is to go out and get better with every practice and match. 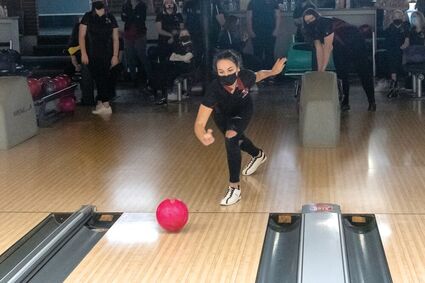 "This is a great group of girls and with almost all of them being new to the sport, we have set several obtainable goals early on and will reevaluate some of our goals and expectations as the season progresses," Thomas said. "I am very excited for the future of Bulldog bowling. This group definitely will continue to grow together, and we have the potential to make an impact in the Olympic League down the road."