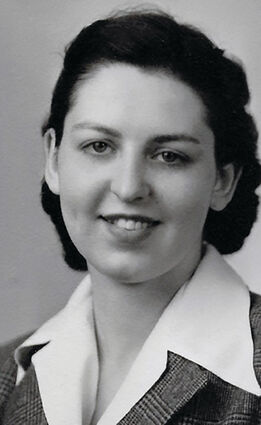 She was born June 30, 1921, at Billings, Montana, to Arthur and Belle Rediske. From 1953 -1967, she resided in Bonners Ferry, where she worked as a bookkeeper for Cook's Electric, along with maintaining a household and raising her two sons. She helped her husband start the Boundary Bowmen Archery Club, and was an active member in the Veterans of Foreign Wars Auxiliary.

From 1967-1987 she resided in Ocean Shores and McCleary, WA, and held down the position of bookkeeper of their family operated Sand Dollar Bakery and Bear Claw Bakery/Gene's Lock Shop, respectively, until retiring in 1987. She continued to fill her life with activities at the McCleary United Methodist Church while also being their official bookkeeper.

In 2014, she moved to and resided at Maple Glen Senior Living in Shelton, WA, until her death. While there, she wrote a collection of stories of events throughout her life, which her son, Mike, was able to have published. She also made sure she kept busy by walking for exercise, reading, playing scrabble and pinochle, and participating in any and all of the activities that Maple Glen had to offer their residents.

Muriel was an active member of the Shelton United Methodist Church and participated in bible studies and UMC women's activities.

A memorial service will be held at a later date when COVID restrictions allow. Donations in Muriel's honor may be made to Shelton United Methodist Church, 1900 King Street, Shelton, WA, 98584.