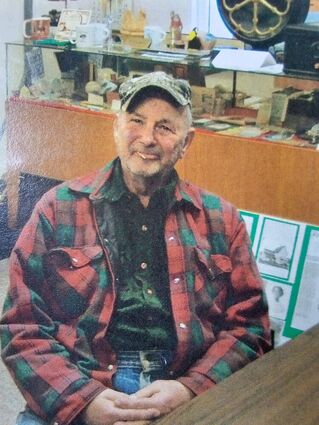 William George Timm was born December 22, 1926, to William Gottleib Timm and Margaret Jeffers Timm on his maternal grandfather, George Jeffers' farm outside of Amherst, Wisconsin. His first teacher was his 13 year old cousin, Marjorie Pipe at the Pipe School that his grandpa drove him to in a horse drawn wagon or that he walked to or skied to. He recalled snow so deep they had to go out an upstairs window to get out of the house.

In high school he worked at a shipyard on Lake Michigan for .85 cents per hour and then $1.20 per hour, earning enough for the rail trip west to Bremerton for himself, his mother and two brothers, nine and twelve years younger, to join their father who was working at PSNS. There he completed his last semester of high school and in December at age 17 joined the army to serve in the Pacific Theatre. He trained for the invasion of Japan, but then as they were shipping out of San Francisco Bay, learned of the atomic bomb(s) having been dropped. He went to Hawaii and from there to the Philippines on the heels of Manilla being heavily bombed. There he guarded Japanese POW's.

After he got out of the military, he attended Olympic College and married Helen Jane Chaffee in 1950. He was a high-climber and faller, mostly for gypos as a hook-tender. For non-loggers, hook is the boss; the name he often called Helen, "Hook". A gypo logger runs or works for small scale operation that is independent from an established sawmill or company. Though the term's origin was pejorative to disparage small companies that worked during strikes of the IWW, over the years independent loggers adopted and used the word with pride. He was on "shows" in the Snoqualmie area and in Oregon but most were on the Olympic Peninsula; on the west side in Quinault and on the east side in Kitsap, Mason, Grays Harbor, Jefferson and Thurston Counties. The word "show" means the site of a logging operation. He retired from logging in 1959, though he continued to climb and top trees on the side, the last time at age 70 when he tore a femoral artery and Helen forbade further climbing.

He worked decades for DNR at Mission Creek Youth Camp as a forestry foreman. His youth crews fought fires around the state as well as maintaining the state forest land on the Tahuya Peninsula. He was a volunteer fire fighter in Union for many years and then a fire commissioner for District 6. As a Hood Canal Lion he shucked oysters at Oyster Fest and he was honored to be a Mason with Union City Lodge. He enjoyed his last working years as a timber cruiser for the Manke's.

He was a trapper as a teenager and then a hunter as a young man. He studied mycology and with Helen, was an avid 'mushroomer' and shrimper on Hood Canal. They enjoyed backpacking, boating and world travel together. He had an enduring love of animals, both wild and domestic.

After 67 years of marriage, Helen predeceased him, as did their infant daughter, Terri Jane, in 1952, and his brother Dick, nine years his junior, in 2016. Bill Timm passed away October 23, 2021. He is survived by his children, William Jeffers Timm (Vicki) and Dianna Timm Dryden and his daughter, Jerre Lous Heikkola, as well as by his brother, Thomas Timm, his grandchildren Shiane Saeger (Jerry), Shawn Wilder (Chris), Chad Timm (Amy), Lauren Adams (Louis Skinner) and great grandchildren, Bailey Hensley (Braydyn), Chloe Davidson (Miles), Tessa Dragoo, JoAnna Timm, Owen & Aiden Wilder, Travis Saeger; nieces Su Olson & Dixie Swedstedt, nephews, Dennis & Doug Olson, Jeff, Mark and Terrence Timm and many other relatives, friends, and neighbors. There will be a graveside service yet to be determined.