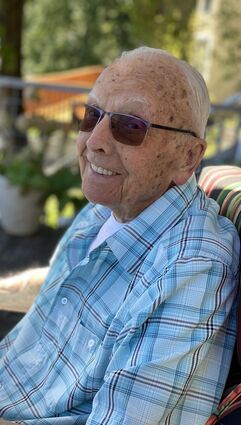 Max L. Dean passed away quietly Monday, September 13, 2021, in his home in Shelton, Washington. Born to Frank and Ocie Dean in Wichita, Kansas January 24, 1926, at five years old his family moved to a farm in Arkansas City, Kansas to be close to his grandparents. Farm life was not for Max though, at age 17 his parents granted permission for him to join the Navy. After boot camp, he graduated from Aviation Ordnance, Aerial Gunnery and Bombardier Schools. Joining a photo squadron, he spent hours in the nose of a patrol bomber, Dog 104, manning two 50 caliber machine guns wearing a jump suit, life preserver, and parachute harness. Accompanied by two fighter planes his crew shot photos of enemy lines, flying at low altitude and slow speed. After serving honorably for 3.5 years, he headed to Union, Washington where his folks had moved.

Union is where he met the love of his life, Betty Allen. Enrolling in Gunsmithing School in Denver Colorado, he soon realized he couldn't live without Betty by his side. He wrote her parents Dollie and Herb and asked for her hand in marriage. The day after turning 18 years old, Betty boarded a plane for Denver to marry Max November 15, 1948. After finishing gun school the couple returned to the Pacific NW, where their first son Casey was born, with their second son Louie arriving 18 months later. The family spent a few years in Avenal, California while Max worked on oil rigs and where their daughter Lorraine was born.

Missing their families, Max and Betty returned to Union where Max opened Dean's Gun Shop lasting 65 years, and also started his carpenter profession. Several years later they moved into Shelton where he was construction foreman on local projects including the Washington Corrections Center and Sewage Treatment Plant. Max, with Betty at his side, built six beautiful houses in his spare time while working full time, including one for his daughter and son-in-law. Max retired at Lake Limerick, enjoying weekly card parties and rounds of golf with friends.

As a founding member and executive officer of the Shelton Rifle and Pistol Club, he and about a dozen of mostly WWII veterans started shooting at the Shelton Airfield in the 60's; they built their first range there. Max taught young people gun safety as instructor of VFW Post 1694 Rifle Team. He was match supervisor of the Shelton High School Junior Rifle Team, a program of marksmanship and competition in the 1970's. He started the Action Cowboy matches in the 1990's and later developed defensive course matches with props and problem-solving scenarios. A fine marksman himself, he won NRA registered high power rifle matches and other club competitions. Max was dedicated and continued to work in his gun shop and shoot pistol at the range throughout his life.

Early on Friday or Saturday mornings Max and son Casey were often seen at garage sales. They attended many gun shows together, often having tables at shows around western Washington. An avid suspense and western reader, Max enjoyed discussing and trading books with son Louie. With daughter Lorraine he enjoyed recalling family history. A cross word puzzle was completed daily with morning coffee.

Together 67 happy years, Max and Betty celebrated wedding anniversaries with trips to Reno, going south to visit snowbird friends, and with family. Betty brought happy tears to our eyes when she sang "You Are My Sunshine" to Max. He always rewarded her with a big kiss. They created a close-knit family. Every holiday, birthday and special occasion the family gathered. Many happy memories of these family gatherings would include a poker game, game of 31, home-made chicken and noodles and Max's favorite lemon cake. Max's grandkids meant the world to him, filled with pride he kept current on each of their lives. His eyes lit up each time the great grandkids told him a story, shared a smile, or gave him a hug.

He may have thought of himself as a man of few words, but he was surrounded by those who admired him for his gentle manner, sage advice and wry sense of humor. Max lived 95 years, always living his best life. Survived by son Casey Dean (Dawn); daughter Lorraine Coots (Randy) and 6 grandchildren, Levi Dean (Laura); Casey Dean (Katie); Nicole Coots Adams (Chris); Riley Coots (Morgan); Katie Dean; and Cari Dean, as well as 11 great grandchildren. He was preceded in death by his wife Betty in 2016, son Louie Dean in 2020and his sister Helen Pearce in 1989. He will be missed and forever loved.