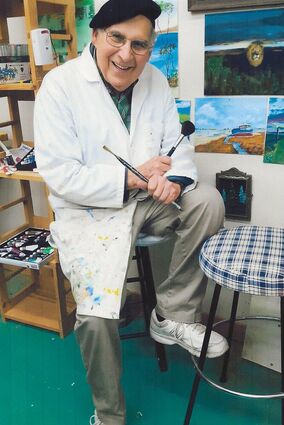 Craig Chapman, 84-year-old resident of Alderbrook, passed peacefully in his sleep at home on Saturday, September 4, 2021, after a four-year battle with cancer. His wife of 62 years Alice (Bourgault) Chapman and his grandson Storm Benjamin were at his side when he took his last breath.

The eldest of three children Craig was born in Astoria, Oregon on August 8, 1937, to Kenneth and Geraldine (Haggerty) Chapman. His family relocated to San Jose, California when Craig was still an infant. It was there he met his lifelong friend Richard (Dick) Stringall. The family relocated to the Chapman Family home on Hood Canal when Craig was 15 years old. When school started that year, Craig's bus stopped in the Skokomish Valley where he first saw his future bride, Alice. He thought she was the prettiest girl in school. They started dating on July 4, 1955, when Craig invited Alice to attend an Independence Day celebration at his family's home. They were married at St. Edward's Church in Shelton on April 18, 1959.

Craig and Alice lived in Seattle, Edmonds, and Lacey before returning to Shelton in 1970. Craig was an Allstate Insurance Agent at the Sears store, next to his father's Evergreen Drug Center in Evergreen Square. Craig made a career in sales and achieved his entrepreneurial goal in 1980 when he opened the Craig Chapman Insurance Agency. Alice joined him at the agency 1981 and together they served as Independent Insurance agents until selling the agency and retiring in 1999.

Craig was an avid golfer, a self-taught wood craftsman and painter. Always the creative soul, he was constantly engaged in projects for his home, family, neighbors, and community. He remodeled the family home on Cole Road, including a putting green in the yard that once held an orchard. One year for Christmas he built a small herd of cows for family and friends, visitors at his home are still greeted by one at his door. He built furniture for the Pro Shop and street side flower baskets for the Alderbrook Community.

Craig was a natural leader and civic-minded pillar of the community. He was associated with the Boy Scouts of America from the ages of 8 to 61, including serving as a committee chair for Troop 112. He held the title of President with the Shelton-Mason County Chamber of Commerce and the Shelton Noon Kiwanis where he was awarded Distinguished President. He was the Chairman of the Board for the Mason County Republican Central Committee, Mason County Heart Fund and for 25 years with the Exceptional Foresters.

He chaired committees for Little Skookum Watershed, the Huff and Puff Trail construction, and the Greens of Bayshore Golf Club. He was the Commodore of the Alderbrook Yacht Club and served two terms Parish Council Member and for 25 years on the Finance Committee at St. Edward's Catholic Church. He volunteered for six years (2012 – 2018) at Mason General Hospital with his dear friend, Lloyd "Bear" Bankson.

His full and joyful life will be forever cherished by his wife Alice and their children Rick (Mary) Chapman of Shelton, Steve (Monique van Herksen) of Amsterdam, and daughter Connie of Lacey. His grandchildren: Rebekah (Tom) Kealy, of Spring Lake, NC, Kristopher (Lorena Estrada Gomez) of Pullman, Morgan (Jamie) Pendon of Spokane, and Storm Benjamin (Taylor McKinnon) of Seattle. Great Grandchildren: Waverly Pendon, Joseph Chapman and soon to arrive Derek Kealy. His sister, Sheridan Holman of West Richland, and brother Randal of Shelton, WA, along with his niece Stacey (Spain) Abney and their two children.

Craig's family is deeply grateful to longtime friend John Willis, who selflessly provided care, comfort, and solace to Craig in his final days.

Craig's infectious laugh, charm and kindness brought people into his life that stayed for many decades. He will be greatly missed, and his memory cherished by all those who knew and loved him.