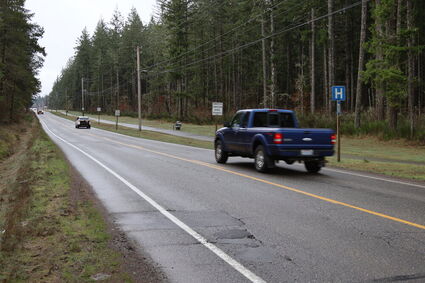 The Shelton City Council on Tuesday awarded a $267,322 contract to Miles Resources to resurface the pavement and separate lanes on Brockdale Road from Wallace Kneeland Boulevard to Batstone Cutoff Road.

The city received six bids for the project, ranging from Miles Resource's low bid to the highest bid of $546,285 from Central Paving.

The project is funded by $278,000 in federal funding from the Surface Transportation Block Grant program allocated to Mason County in 2021, which requires the city to give a 13.5% match, and $80,000 from the city's Transportation Benefit District funding budgeted in 2022. Brockdale Road is listed in the city's Six-Year Transportation Improvement Plan.

The Shelton City Council on Tuesday finalized the purchase of land on Olympic Highway North for a new sewer lift station.

The council voted unanimously to purchase parcels by two landowners at Olympic Highway North and A Street for $405,000. The council gave the action preliminary approval at its Jan. 3 meeting.

The North Division Sewer Life Station will redirect most of the wastewater flow in the northwest sections of the city and pump to the membrane treatment plant near Sanderson Field.

According to the report from the city's Public Works Department, the property purchase demonstrates the city's commitment to the proposed comprehensive plan capital improvement projects "and can be helpful for the city to secure future grant funds to construct the $9.2-million dollar lift station and force main project."

Completing the North Division Sewer Lift Station and increasing treatment storage at the membrane plant are primary goals in the partnership between the city and the Squaxin Island tribe, the city report states. The projects will "allow much more reclaimed water to be reused, or infiltrate into the Goldsborough Creek aquifer, and reduce the amount of wastewater discharging from the main treatment plant into Oakland Bay," it said.

The City of Shelton will no longer pay for seven guaranteed beds daily at the Mason County Jail, and will instead pay $130 a night for beds it uses.

The city has been contracting with the Mason County Sheriff's Office for jail services, and currently pays for seven guaranteed beds per day. Five of the beds are reserved for arrestees who are only being charged with violations that would be adjudicated in Municipal Court. Inmates are being booked for Class A and B felonies, and now the occasional Class C felony, but not for lesser charges.

Due to those restrictions, "We're paying for seven beds we can't necessarily use," Shelton Police Chief Carole Beason on Jan. 3 told the Shelton City Council.

The city recently signed a contract to pay the Nisqually Correctional Facility $130 a day to provide jail beds to arrestees. Shelton Police transport the inmates to that facility.