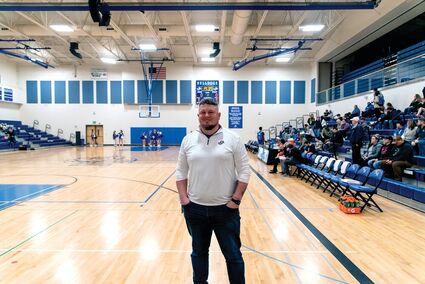 Ray Bonnell poses for a photo at North Mason's gym.

Ray Bonnell is in his first year as athletic director at North Mason High School. His journey to Belfair took him around the world with American football.

Bonnell was born in Cincinnati. His family moved to Kent while his uncle, Barry Bonnell, played baseball for the Seattle Mariners from 1984 to 1986.

He attended Kentwood High School and played football, which got him recruited to play linebacker at Washington State University from 2000 to 2003. The Cougars had three 10-win seasons while Bonnell was in uniform, earning wins in the Sun Bowl in 2001 and Holiday Bowl in 2003. WSU faced Ok...