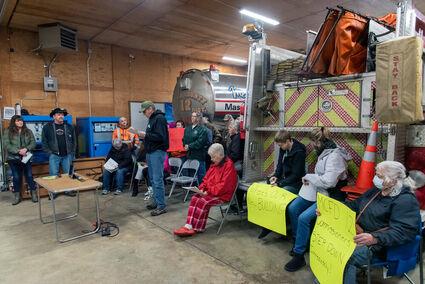 While Mason County Fire District 12 is fighting legal battles to keep the fire chief and commissioners in place, it appears the community has had enough.

While many community members had different questions for the district, they were unified in their desire for answers and resignations.

"Why do you have almost a $10,000 Verizon bill? We have a company with 18 employees that have phones and our bills were never like that," a different community member pointed out during the meeting.

Commissioners asked community members to give them a list of their questions for the district to respond to, all while fire chief Kelli Walsworth, who was in the building, stood alone and out of the sight of most community members. The commissioners promised to post meeting minutes and the vouchers that were approved at the Dec. 27 meeting on their website, mason12.com, but it had not been posted by Wednesday morning, more than a week after promising to post them.

"It's gross. Just like today, $77,000 today, that puts them over half a million dollars on a $308,000 budget," Mike told the Journal. "They're spending, they're not using EMS funds correctly. That has to be used for EMS only. Commissioner (John) Pais, I just talked to him a couple weeks ago and I told him you only have $54,000 in general fund until April 1 when taxes hit. He goes, 'Oh, we'll just transfer over out of EMS.' Well, you can't. So now they're paying all fire, all EMS with EMS money and it's illegal. He had no idea that Kelli was receiving $150 a day EMS shift pay. When we were there, it was $40 a day and you had to be here at the hall ready to roll. She's not at the hall, she's getting $150 sitting at home and I talked to the state auditor about it and it's illegal to pay her after she's fired. So they've been paying her the whole year, there's so many things."

Brown pointed out the fire district did not host a budget hearing open to the public before passing it at a special meeting Nov. 30.

"There's no legal arm to hold these people accountable," Mike Brown said. "I want to talk to my senator because the state needs to look at putting something out so if this happens to some other district in the future, somebody can stop it. Right now, they're just bleeding the taxpayers' money. It's terrible. They bought an ambulance, a second ambulance, they didn't need it. We do not transport and even if we did transport, you can transport with the one we have."

Brown said that no other fire departments in Mason County want to work with Fire District 12 because of fire chief Walsworth.

"They're acting surprised. We know more than they do," Brown said. "That is terrible and it's all open public records. I've tried to talk to commissioner Pais several times. We had been out two years, clear out to 2020, we were still getting calls from vendors because these guys hadn't paid for a year, they're a year behind. I call commissioner Pais and tell him."

Fire District 12 is looking for a new chief while Walsworth remains the chief but is not paid a salary as of Sunday.

The commissioners reported one person applied for the fire chief position, but they pulled themselves out of the running. This is not true, according to Greg Schroder, the person who applied to be fire chief. Schroder sent an email applying for the position of fire chief on Sept. 26.

After not receiving a reply, Schroder followed up on his application on Oct. 25 with another email. He received a reply to his email application from the [email protected] on Oct. 25, stating "received, thank you."

"I already knew about the FD 12 mess with the financials and all the problems they were in and I thought, well, this would be a good opportunity. It would tell me how clean they are," Schroder told the Journal. "If they reached out for a lifeline, get a new chief in there, and if you were clean, you could switch it around and it could be a misunderstanding or this or that. It could be an experience and this thing could have blown away. They didn't do that. I truly believe they flew the position just not to hire it."

"The only thing I can report on is my dealings with them, that they responded back to my email, my application and I'm still waiting to hear," Schroder said. "As far as them reaching out to me or telling me I didn't qualify, I know I would qualify. I've been in the fire service for 33 years."

Schroder's 33 years of experience began in 1979 as a seasonal firefighter for the California Department of Forestry. His most recent fire service was as battalion chief and training officer for the Wilton Fire Protection District in Wilton, California. He said he is still interested in being the fire chief of Fire District 12.

"They need to hire who they need to hire, but on the other side, if you've got people applying for a position, you need to interview for the position and since you did receive and acknowledge their application, you should probably at least do a phone interview," Schroder said. "They haven't even done that."

Brown said the community asked if he would step back into the role of chief, so the residents of Fire District 12 have options for a new fire chief.

"The whole thing is out of control. They need to step down, they need to let the public have their department back," Brown said. "They wouldn't let anybody in until 2 o'clock. That is so unsatisfactory. This is not their fire department. They work for the people of this district. That is their bosses."