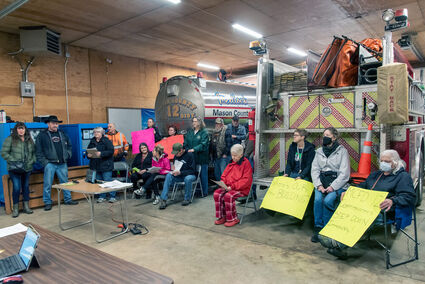 Community members in attendance hold up signs telling the Mason County Fire District 12 chief and commissioners to resign during the public comment portion of the monthly commissioners' meeting Tuesday at the MCFD 12 headquarters in Matlock.

Mason County Fire District 12 is under investigation by the FBI, according to the Mason County Sheriff's Office.

In an email to the Journal, Detective Corporal Michael Sargent wrote, that the Sheriff's Office has suspended its investigation into the case and "it has been adopted for investigation by the Federal Bureau of Investigation."

Fire District 12 hosted its monthly meeting Tuesday in Matlock. When asked about the investigation being handed over to the FBI, Commissioner Albert Wilder said, "As far as we know, it's not."

"None of the attorneys the fire department has right now know...