'The Way of Water' lives up to 'Avatar' legacy

Make sure you're rested with an empty bladder 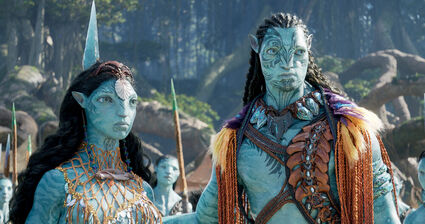 Reef people Ronal (Kate Winslet) and Tonowari (Cliff Curtis) are among the new aquatic Na'vi whom moviegoers will meet in James Cameron's "Avatar: The Way of Water."

How does James Cameron expect this franchise to sustain three more films?

When I saw Cameron's first "Avatar" film in 2009, my reaction was similar to most reviewers and moviegoers.

Its immersive, richly realized visuals absolutely blew me away, but its story and characters felt like a ham-fisted mashup of "Dances With Wolves" and

The plotlines and relationship dynamics of "Avatar: The Way of Water" are more complicated and populous than the original film, but that doesn't actually make them more complex or nuanced.