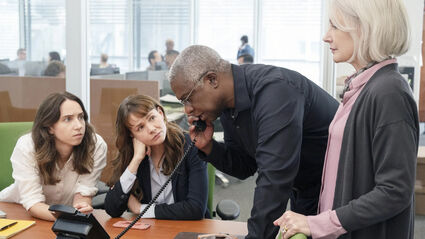 Zoe Kazan, Carey Mulligan, Andre Braugher and Patricia Clarkson are among the impeccable actors in "She Said."

"She Said" is a solidly competent, impeccably well-acted true-crime journalistic procedural film, essentially serving as an entirely deserved paean to how the efforts of New York Times reporters Jodi Kantor and Megan Twohey helped expose the serial sexual predation of film producer Harvey Weinstein, but one might be forgiven for thinking they've seen this film before.

The first impulse of a lazy reviewer is to compare such films to 1976's "All the President's Men," but closer comparisons are found in 2015's "Spotlight," about how the Boston Globe helped expose the systemic sex abuse committ...