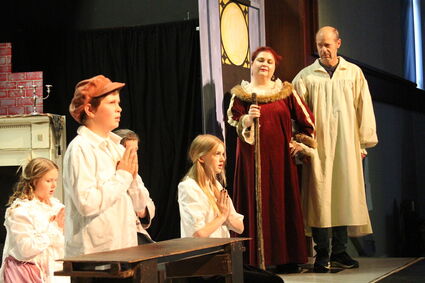 The Cratchit kids (from left, Elyssa Salzer, Evan Fuchs and Harmony Stevens) say their prayers as the Ghost of Christmas Present (Emily Carnahearn) and Scrooge (Jon Halverson) look on in Connection Street Theatre's production of "A Christmas Carol Musical," which opens Friday at Faith Lutheran Church in Shelton.

Charles Dickens' "A Christmas Carol" has been brought to life in many ways since its publication in 1843.

Ebenezer Scrooge was immortalized by Mr. Magoo, voiced by Jim Carey, portrayed as "Ms. Scrooge" by Cicely Tyson, and depicted by Michael Caine playing opposite The Muppets. Versions have been set in the Wild West with Jack Palance, and in a TV studio with Bill Murray.

Connection Street Theatre director Michelle Whittaker promises some new twists on the holiday perennial when the Shelton group stages "A Christmas Carol Musical" at 7 p.m. Friday and Saturday and Dec. 9 and 10, and at 2 p.m. Sunday and Dec. 11 at Faith Lutheran Church, 1212 Connection St., Shelton.

"We have some wonderful surprises," she said.

Tickets are available at the door and online at http://www.faithshelton.org/connection-street-theatre. The opening show Friday is pay what you will, and admission to all other shows is $5.

This 2018 version features a script and lyrics by Chris Blackwood, and music by Piers Chater Robinson. This version sheds added light on Mr. and Mrs. Fezziwig and the younger version of Scrooge, Whittaker said.

This is the group's first production since "Seussical the Musical" in April and May of 2019, before the pandemic. The group was then known as Faith Acts, and its new name reflects its goals.

"Connection Street is not just we're located, but speaks to our message, connecting with the community," Whittaker said.

"This is our re-activation of our community theater," she added.

Whittaker said the group plans to stage four productions a year: a Christmas show, a Valentine's Day dinner theater, a spring musical, and Shakespeare in the parking lot in the summer. The group also will offer theater workshops for youths, and wants to attract people who speak Spanish. 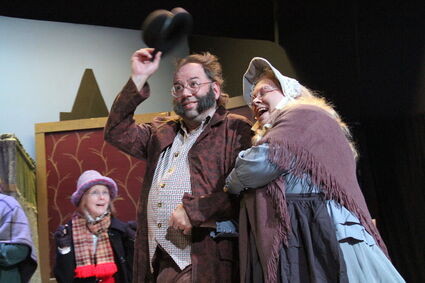 Auditions for the Gilbert and Sullivan musical "The Pirates of Penzance" are set for 1 p.m. Jan. 22. Performers must be 14 and older, and families are encouraged to audition together. The musical will be staged May 12-14 and 19-21.

The group, which usually rehearses on Sundays, is seeking new members, and can especially use more men, Whittaker said.

WHAT: “A Christmas Carol Musical”

ADMISSION: Pay-what-you-can on Friday; all other shows $5 at the door