Mary finds her father lying in his bathroom 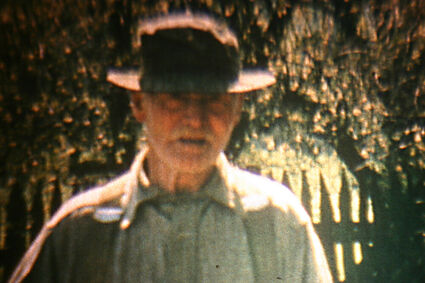 Mary's dad in an undated photo.

This was a very sad week for Mary and her family. Her dad died and she is in shock. I think this is the first time in almost 15 years of transcribing her diary that she shows so much emotion. She loved her father. He lived his final years with Mary and Sam in the apartment above their garage.

Today I arose early and got my work done, though I was tired. Sam washed clothes after I got started. Squires came down and planted 42 wild azaleas. Sam went duck hunting and got one duck, Bill four and Emmett three. There were eight men there, too many for good hunting. To Belfair and saw Donna and Helen. We had a nice visit. Got ready for trip. A very warm day out. I sat in the sun for a couple of hours. It surely felt good. Made apple sauce and had pheasant for dinner. It was delicious. Everything is nice and clean so I can leave for a few days. All I have to do is pack my suitcase and I'm ready to go. Called Cleora. She was so happy last night. Felt it was a big success and so did I. Letter to Robischau.

Today I got up early and got all my work done. Sam went out hunting early and got one duck. Then about 10:30 he left for east of the mountains to get pheasants. I finished ironing and thought I heard someone sick upstairs before Sam left. Asked him to see if Papa was OK and he said he was asleep in his chair. I went up to see how he was, and he said he had lost his breakfast, so I cleaned up the sink and went downstairs and got him an Alka-Seltzer, which I took up to him. About 30 minutes later I went up to see if he felt better and found him lying in the bathroom. I could not move him, and his face was purple color, yet his hands were still warm. I called Emmett and Bill Cady who came down. They felt for his pulse and said he was gone. It was an awful shock, but I am glad he did not suffer too long. We called Lewis who came out, then Mason County sheriff and coroner to release the body. I called Betty and she came up right away and has been here ever since. John Stuyts and Swan Truedson were down also. I picked all the dahlias as I'm afraid it will freeze tonight. Called Lovie and he in turn called Henry who will be down tomorrow. Henry was pretty broken up, too. Very warm and lovely out today. I was grateful for Betty's willingness to stay with me. Tried to get Sam at Garretson's but he had not been there so called State Patrol to check if they could locate him. Betty brought a crab and stew up. We ate it for dinner. Very good!

Today Betty and I arose late. She had coffee and a butterhorn and went home. Flossie and the boys were here a few minutes when Louie and Henry came. They decided to look over the cemetery at Belfair and see Emmett about getting the grave dug. When they returned, I had lunch ready, so we ate. They went to see Emmett again and I met them at the store about 30 minutes later. We saw Lester Lewis in Bremerton who had just returned from South Dakota and told us all about his trip. So, we made all the arrangements, and the funeral will be 1 p.m. Wednesday. The boys left for Bellingham, and I went home. Lots of cars on the road. Then called everyone I could so they would know about the funeral. A few more to call yet. To Skenes and told them. Waldo Chase was there. We talked weaving. Ate lunch with them, very good. Home. The moon very bright. Vina says her dahlias froze last night.

Today I went to Holly. Took Evelyn Hyde along and we saw Aunt Katie who gave us lunch. We enjoyed it so much. Also, she gave us some plants. Then up to Grandma's who had one of the Rasons as a visitor. She was grieved over the sad news of my dad's death. It affects the older folks the most to see each other go, one by one. Stopped at Miles Howell's at Tiger Lake and saw the new house. Oh, it is a beauty! Saw Emmett and he will contact the pallbearers. Home and cleaned up. Cleora phoned she would come out so she and Ralph arrived about 8. He left about 10 and she spent the night. We really had a wonderful visit. Nichols came over and got rid of the hens so we shall have to pick them tomorrow. To bed late. A big moon out.

Arose late to find Sam home. He slept upstairs. He had seen Papa's door shut but never went to see how he was. Why he can be like that, I do not know. He was shocked to hear about Papa although he never kept his promise to return Sunday like he said he would. As usual, was full of excuses. A little late this time. Took Cleora home after breakfast. Rudy S. came in for coffee. When I returned Henry and Laurice were here. The men went up to the cemetery and we cleaned the seven hens, four were laying. Too bad to get rid of them now. Sam made lunch and we ate. After lunch Laurice and Henry went to Port Orchard and I did a few necessary things. Sam took chickens to the locker and got a few groceries. A very lovely sunset and very mild out. Hope it does not rain tomorrow. Grace and Louie came about 6 so I made dinner. Grace thought it a good idea if I went to see Papa before the funeral, so I went in. He looked wonderful. So peaceful. A full moon out. To bed early.

Awoke early so I made breakfast. Then John Stuyts came down with a cake while we were doing the dishes. Cleaned house and got ready for the funeral. Sam and Louie went up to Belfair to get gas, mail, etc. Very foggy out today. The barometer is way up. Many cards of sympathy came in the mail today. Everyone is so kind. To Bremerton at 12:15 and the funeral was lovely. Mama was there and sat with us. There were over 200 people there and such wonderful flowers. A long procession followed us to Belfair and to the cemetery. There were short services there and then we went home. So many came up to shake our hands. It was very hard. Buster, Dorothy Schultz and Arley Martin and Howard Grays came to the house for a few minutes. It was very sunny all day and I was thankful for that. Sam started the dinner and the rest of us went to the cemetery to see the flowers. Everything was so peaceful there. The sun and birds were singing. Home and ate dinner and then Henry and Laurice left for Sedro-Woolley. Sam, Louie, Grace and I went to Lewis and got more cards to thank our friends for the wonderful flowers. They are all finished now. Laurice helped us on them as she knew the address of the ones in Sedro-Woolley. There were 66 floral pieces, 11 were potted plants. Laurice took three home. Grace will take some tomorrow. To bed late. Very cold and foggy out. We saw many old friends today. Some came for miles, some laid off a day's work, to go to my dad's funeral. Tomorrow we may go away for a couple of days to rest up before I can get into things again.

Arose early and got the breakfast. Sam did a lot so Louie and Grace could get an early start for Olympia. Sam and I locked everything up. I took cards to P.O., and we caught the 9:25 boat. Saw Mamie Gould on the boat so talked to her on the way over. We drove to Vancouver, B.C. Arrived there at 2:10. Sam went to find a hotel, so I went shopping. I found a pair of gloves, some linen handkerchiefs and several things. Sam bought himself a shirt. Got a room at the Devonshire Hotel where we went to bed early as were both so tired. We had a smorgasbord supper at Henry's. It was very good. We read awhile and to sleep. Very hard to concentrate on shopping as Papa's death was such a shock. Still can't believe it is all over.

■ Clydene Hostetler is a longtime Belfair resident, local historian, media archivist and documentary filmmaker of "Hidden in Plain Sight." She has been researching Mary Theler's life for the past 14 years. She can be emailed at [email protected]