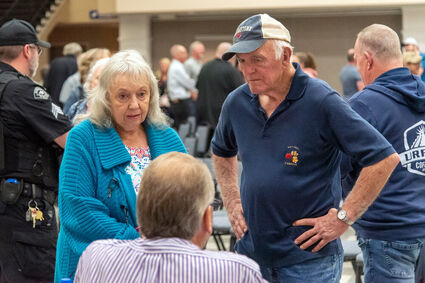 About 75 people attended the City of Shelton's community forum on homelessness Tuesday evening in the Shelton Civic Center.

The City of Shelton's homelessness task force recommends the city create a mitigation site for homeless people for one year, support grant applications for current shelters and for rapid re-housing, provide storage lockers at a mitigation site and support affordable housing.

Those recommendations were announced at a "Shelton Spotlight" community forum Tuesday evening at the Shelton Civic Center. The City Council will vote on the recommendations in November, City Manager Jeff Niten told the crowd of about 75 people.

The city established the homelessness task force in June amid complaints by downtown residents, visitors and business owners about trash, vandalism, open drug use, and public urination and defecation by people living on downtown streets.

The homelessness task force presented seven recommendations to the council. One of the short-term goals is to establish a mitigation site, a legal tent encampment for homeless people, for one year. Niten said a site has been identified.

The task force offered three medium-term recommendations: placing public dashboards on the city website that detail what shelter beds are available; embedding one or two Mason County-focused designated crisis responders with the Shelton Police Department; and providing storage lockers at a mitigation site.

Homeless people are pushing their possessions around town in shopping carts because they are afraid someone will steal their belongings if they are left unattended, Niten said.

The task force's recommendation for a long-term solution is to support affordable housing. If housing options are not available, "all you end up with is a mitigation site that continues to grow," Niten said.

At the "Spotlight Shelton" presentation, representatives from local organizations that work with the homeless, city officials, and representatives from the Shelton Police Department and Central Mason Fire & EMS talked about the services they provide, and the challenges they face.

"This issue has an impact on all of us," Niten said.

After almost an hour of presentations, the audience members were invited to talk with the speakers and the seven members of the Shelton City Council, who were sitting at tables. No public comments were taken at the event.

Colleen Carmichael, executive director of the nonprofit Quixote Communities, was the first speaker.

Carmichael pointed out the program is "recovery based." Residents are required to be clean and sober.

Susan Kirchoff, the lead case manager with The Youth Connection, told the audience her passion for helping homeless people comes from her own experiences: she was homeless as a child, a teen and then as a mother of four. The nonprofit organization, formed four years ago, operates drop-in centers for people ages 12-24 in Shelton and Belfair and three off-site shelters.

Kirchoff said the organization has worked with 178 homeless youths, and helped 76 find housing.

Strozyk-Frazier said a recent count showed 242 people are homeless in Shelton, including 110 under the age of 18.

Athena Ayres, the executive director of the Shelton-based nonprofit Community Lifeline, said the organization usually helps about 300 people each year, but that number is at 191 so far this year because of staffing and funding shortages at the downtown Shelton shelter.

Of those 191, 67% have disabilities, 54% have one or more chronic health problems, and more than half have substance abuse problems, she said.

Mark Ziegler - the city's parks, recreation and facilities manager - estimated the city spends about $2,000 to $2,500 monthly to clean up campsites created by homeless people.

Chief Jeff Snyder with Central Mason Fire & EMS said that since 2017, the department's number of calls for mental health problems has increased 40%.

"Our crews are not really trained for that," he said.

Substance abuse is the second most frequent call when administering to homeless people, Snyder said.

In 2021, the department responded to 200 incidents in the two-block downtown area that includes Brewer Park, Community Lifeline and Post Office Park, he said.

Captain Chris Kostad with the Shelton Police Department talked about the 2018 Idaho court case Martin v. the City of Boise, triggered by a homeless man who was arrested for sleeping on a sidewalk. The court ruled that if no beds are available for homeless people in the area, people cannot be arrested for sleeping outside on public property, he said.

The Shelton City Council on Aug. 2 approved code amendment changes that allow community organizations to host temporary homeless encampments of up to 30 people.

The council in a 6-1 vote approved the code changes, with James Boad voting against it without explanation. The vote was the same when the proposal received preliminary approval by the council at its July 19 meeting. 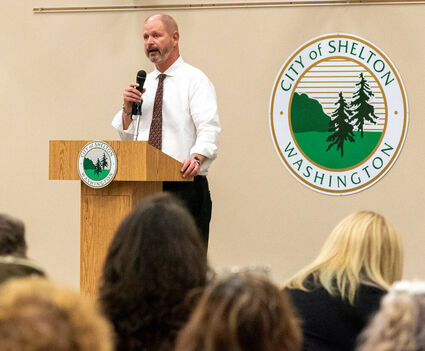 Under the amendments, a community group could be permitted for an encampment on private property of up to 30 people for seven months, and after that could apply for a second seven months. A permit will also be available for a homeless encampments of six people or less, with most of the same rules and regulations.

The rules include prohibiting firearms, illegal drugs, flames inside tents and minors without parents; bathrooms must be available around the clock, and a kitchen available at least three hours a day; and visual screening from the neighbors is required.

The encampment cannot be run for profit, and will not be allowed on a vacant lot – it must contain a secondary use such as a business or home.