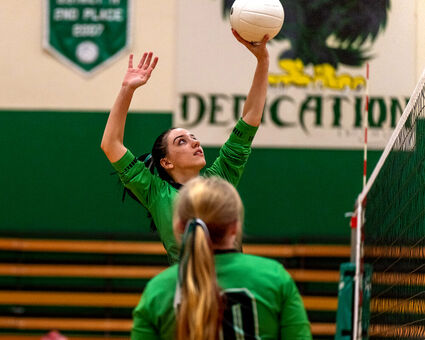 Mary M. Knight High School senior Hailey Lohman rises up to hit the ball during a 1B Coastal League volleyball match against Wishkah Valley on Sept. 29 in Matlock. The Owls won the match in straight sets to improve to 2-0 in league play.

The Owls' took flight with gusto.

MMK entered this week with a 2-0 record in 1B Coastal League action (3-4 overall).

In the Sept. 27 match against Oakville, the Acorns led 5-2 early before a 13-2 scoring surge by MMK, capped by a one-handed kill from Owls' senior Hailey Lohman - one of two players for the Owls that have been significant contributors since eighth grade - gave the home side a 15-7 advantage.