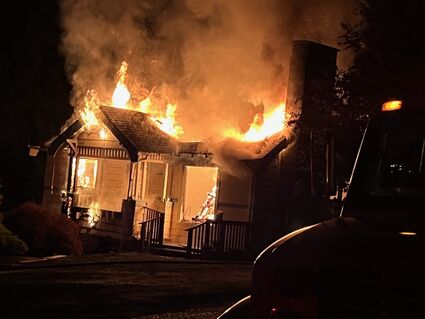 A house fire was extinguished by Hoodsport volunteer firefighters on Schoolhouse Hill Road on Monday. The house was reported a total loss.

A 56-year-old Eugene, Oregon, man was injured while riding a motorcycle in a two-vehicle accident on state Route 106 near Belfair on Monday.

According to a Washington State Patrol news release, the motorcycle was eastbound when a 76-year-old Belfair man turned left in front of the motorcycle, causing the motorcycle rider to be launched off the bike and land in a ditch.

The rider was airlifted to Harborview Medical Center.

The Belfair man was cited for failure to yield. He was not injured.