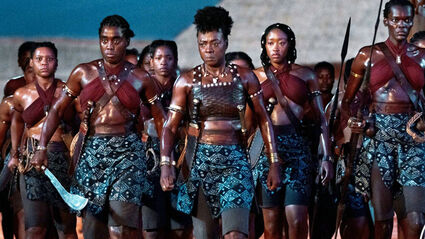 Trifle with Viola Davis (center) in "The Woman King," and she will burn you to the ground.

From the first impeccably staged fight scene of "The Woman King," it's impossible not to hear its implicit sales pitch in your head:

During the 19th century, the West African kingdom of Dahomey did indeed maintain an all-female fighting force known as the Agojie, which was one of the only standing armies (and one of the only uniformed militaries) of any African kingdom, most of whom disbanded their forces when they were not actively at war.

Indeed, in depicting the Agojie's war against Dahomey's rival African kingdom, the Oyo Empire, "The Woman King" ironically undersells the Agojie's formidability, since their ranks swelled from as few as 600 to as many as 6,000 women soldiers under King Ghezo (played by John Boyega) by the mid-19th century, far larger than the elite corps led by General Nanisca (played by Viola Davis) onscreen.

While Ghezo was a real king who presided over what historians have deemed the "golden age" of Dahomey, his principled opposition to participating in the slave trade, as practiced by the Ozo and others, was much more short-lived in history than "The Woman King" credits him with.

And while Nanisca and Nawi (played by Thuso Mbedu), the abandoned young woman who falls under the general's command, are both named for real-life Agojie, those women's documented deeds postdate the movie's timeframe of 1823.

But who cares? Popular retellings of Western-European epics such as the Trojan war or the ostensible adventures of King Arthur and his knights are hardly known for their fidelity to historic fact, so why begrudge "The Woman King" for embellishing the already awe-inspiring legends of the Agojie, especially if it piques audiences' curiosity enough for them to look up the true tales of impressive figures who are too frequently omitted from white historical accounts?

Much like how the film "Prey" immersed its viewers in the preindustrial daily lives of the Plains Comanche people, so too does "The Woman King" convey the legitimately metropolitan scope of the Dahomey kingdom's infrastructure and development, with even white slavers acknowledging that Ghezo was richer than King George IV of Great Britain.

Against this rich historical backdrop is set the sort of tale that has a virtually universal appeal, as Nawi becomes a headstrong recruit into the ranks of the Agojie, after refusing all of the arranged marriages with abusive husbands chosen by her parents. Izogie (played by Lashana Lynch) steps up to serve as Nawi's gruffly affectionate and teasing mentor, while their shared leader Nanisca wrestles with dream demons inspired by a ghost-haunted past.

As much as 58-year-old Keanu Reeves and 60-year-old Tom Cruise are rightly lauded for their endurance and versatility in performing their own stunts and fight sequences, 57-year-old Viola Davis deserves to be ranked among them for her work on "The Woman King" alone.

As Nanisca, Davis' body is so crisscrossed with prosthetic makeup scars that her back almost resembles gristle, but the heft of her muscles, and the acrobatics of her hand-to-hand combat scenes, are no artificial special effects, any more than her well-honed ability to express a full range of emotions without uttering a word.

(My dad insisted Davis deserves an Oscar simply for surviving her training for the film.)

Even when reacting to a plot twist that's more soap opera than "Shaka Zulu," which I suspect many of you will guess at in advance, Davis elevates whatever material she's working with by acting the hell out of her roles, conveying the full weight and weariness of her age, fears and regrets even when she's driven by a retributive fury.

Davis' instinctive skills are well-matched by how Mbedu radiates Nawi's pride and defiance - as a child given up twice over, who wonders at first whether she's simply traded one set of disapproving elders for another - and by how playfully Lynch exhibits Izogie's mix of lighthearted hazing and genuine concern for the welfare of a new recruit.

While Davis is easily the best actor in "The Woman King," Lynch is the most fun to watch, with a stern but sly demeanor that would be ideally suited to a senior enlisted authority figure in another "Top Gun" sequel, or some other gung-ho military film about a cocky young rookie with an aversion to playing by the rules.

A notably tragic side-character is Malik (played by Jordan Bolger), a colonial-raised mixed-race adult son of a captured - and since deceased - Dahomey woman, as he seeks a deeper connection with Nawi, even as it threatens his already tenuously secure status among his white traveling companions.

Purist historians might balk at how "The Woman King" creates a false "happy ending" for the Dahomey by concluding prior to the kingdom's decline and fall, but as a wise man once said, "Nothing's sad until it's over. Then everything is."

The Dahomey weren't able to hold the line indefinitely, but then again, in the end, no one is, so it's enough to remember and celebrate the strengths of a people who have surely earned the attention, even if it's topped off with more than a dollop of artistic license.