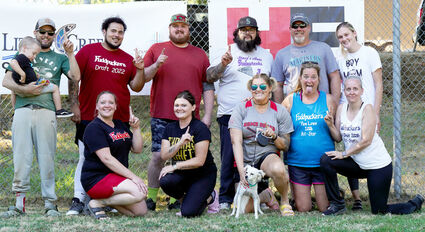 Shelton Floor Covering, coached by Kacy Fladager - first from left in the front row, won the Fuddpuckers Draft tournament team title. The tournament was Saturday and Sunday at Callanan Park in Shelton.

Dusty slides, plenty of laughs and a whole lot of trash talking.

That was the 24th annual Fuddpuckers Draft softball tournament in a nutshell.

The two-day, six-team event Saturday and Sunday at Callanan Park in Shelton had a little of everything, including a few things that probably needed a couple of ibuprofen afterwards.

"We would like to thank all our players and coaches," co-organizers, and sisters, Kacy Fladager and Chelsey Ceniza said after the tournament concluded. "Without you, this tourney wouldn't be such a success."