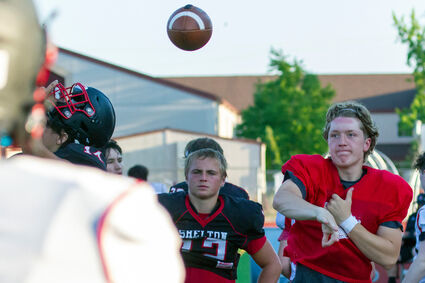 Shelton senior quarterback Mason Goos throws the ball on the sidelines with a receiver during the black and white game Aug. 24 at Highclimber Stadium.

The Shelton Highclimbers football team has high hopes as they prepare for the 2022 football season.

Mark Smith, in his third season at the helm, said the transformation from the end of last year to this year was great. It was much better with a full offseason after having a shortened offseason following the spring 2021 COVID season and turning around three months later for a fall season.

"The first year, we played in February, March, so gave the kids off April so we basically had May, June, July to get ready for next year so it was pretty short deal," Smith told the Journal. "So it feels...