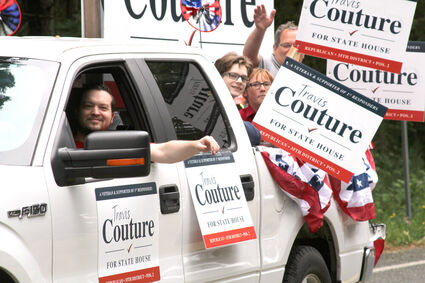 Travis Couture drives a campaign truck in the Tahuya Day Parade last month. In Tuesday's primary election, Couture placed second among four candidates to advance to the Nov. 8 general election to represent District 35 Position 2 in the state House of Representatives.

NOTE: This story has been updated to include Wednesday's 4:30 p.m. second ballot count.

Democrat Sandy Kaiser and Republican Travis Couture will advance to the Nov. 2 general election in their bid for a two-year term representing District 35 Position 2 in the state House of Representatives.

In the initial results in Tuesday's primary race, Couture and Kaiser outpolled Republicans Patti Case and Tiffany Sevruk to face off in their bid to replace incumbent Drew MacEwan of Union, who is running for a seat in the state Senate to replace the retiring Tim Sheldon of Potlatch.