'No matter how damn old I am' 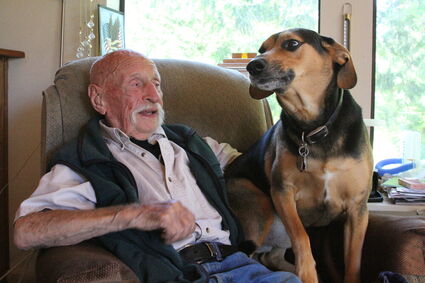 James Aylesworth, 101, shares his chair with his dog Snoop in his home above Triton Cove.

After Triton Cove resident James Aylesworth turned 100, his niece drove him to the Navy recruiting office in Silverdale, where the World War II veteran offered to re-enlist.

He didn't want to be paid, he explained. He specifically wants to help the Ukrainians fight the Russians in any capacity he can.

"I want to help my country no matter how damn old I am," he said.

The recruiter never followed up with a promised reason for rejecting his offer, Aylesworth said. Since then, he turned 101 and moved on to new goals: walking without a cane by the end of August, taking his motorcycle out for per...