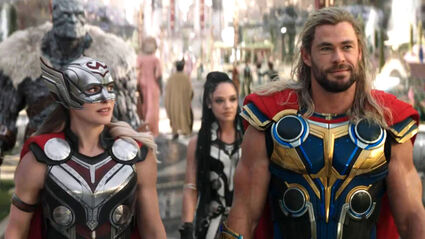 Natalie Portman and Chris Hemsworth deliver two Thors for the price of one in "Thor: Love & Thunder."

Quirky comedic New Zealand filmmaker Taika Waititi has more than earned my love over the years, but after watching "Thor: Love & Thunder," I'm starting to wonder whether someone should be exercising control over his sugar and caffeine intake.

Waititi's 2017 "Thor: Ragnarok" elevated the Marvel Cinematic Universe's "Thor" franchise from its competent yet uninspired onscreen origins, in the Norse God of Thunder's previous two MCU films, by abandoning the mock-Shakespearean aspirations for which Kenneth Branagh was hired to direct the character's 2011 cinematic debut.

Marvel Comics' Thor has never been defined by "Bulfinch's Mythology" or Wagnerian opera, regardless of what Joseph Campbell devotees seem so inclined to believe. The heart of the comics character has always been about the bizarrely random, quasi-scientifically cosmic trappings that artist Jack Kirby spun out of whole cloth, then staple-gunned onto the merest sketch outlines of the original ancient Norse legends.

"Thor: Ragnarok" breathed creative life into the franchise by openly acknowledging the absurdities of the comics' mythos, which Waititi underscored by surrounding Thor with a wildly motley supporting cast, including Tessa Thompson's drunkenly brawling Valkyrie, and Waititi himself as the ridiculously chipper voice of indefatigably friendly slave-turned-rebel Korg (made of rocks, as he's happy to remind everyone).

Given how similar Waititi's comic sensibilities are to those of "Guardians of the Galaxy" Vol. 1-2 filmmaker James Gunn, it's fitting that "Love & Thunder" should open with an aimless Thor still traveling with the increasingly impatient Guardians, just as they all were last seen together in 2019's "Avengers: Endgame."

While Thor's outsized powers have made him an invaluable ally to the Guardians in their biggest battles, he's worn out his welcome with his so-called teammates by repeatedly stealing their thunder (so to speak), leaving them with the awkward task of telling their couch-surfing friend without a fixed address that he nonetheless needs to find somewhere else to crash.

Korg's balladeering narration emphasizes the excessively choppy jump-cuts of the film's introductory sequences, so heavily peppered with gags that they risk coming across as desperate to please, rather than freewheeling and spontaneous, as I suspect Waititi was aiming for.

The overly forced attempts at zany humor stand in especially stark contrast to the tragic preludes of Christian Bale's Gorr the God-Butcher and Natalie Portman's Dr. Jane Foster, both of which rely on the subtle acting strengths of their performers.

Even when Jane and Thor's relationship strife is played for laughs in an extended montage satirizing romantic dramas, Portman's reactions ensure it feels as emotionally earnest and authentic as Jane's understated struggles against a stage 4 cancer diagnosis.

Likewise, we see Gorr's faith in his callous, serf-serving god Rapu - played by Jonny Brugh, Waititi's costar from "What We Do in the Shadows" - endure even through his own Job-like suffering, as he prays for Rapu to save the life of his daughter, Love (India Rose Hemsworth, real-life daughter of Chris Hemsworth), while their bodies are battered by desert sandstorms.

But when Rapu arrogantly seeks to strike down his former follower, for making demands of his god, Bale sells Gorr's transformation from a sympathetic grieving father into a Tolkien-esque monster corrupted by darkness.

Russell Crowe's depiction of Zeus leans hard on not only his legendary performance from Ridley Scott's "Gladiator" in 2000, but also the real-life reputation Crowe has developed for starting liquor-fueled fights in the tabloid press, in the two decades and counting since then.

With his "Saturday Night Live"-level "Greek" accent, his tightly curled locks of hair and the expansive waistline that the molded-on abs of his golden armor can't hide, Crowe's vainglorious Zeus is both a bully and a coward, and a reminder of who Thor was dangerously close to becoming in his first film.

But for as much of a short-sighted, overly confident lunkhead as Chris Hemsworth's Thor can be, he earns our affections, and Jane's love (again), because he eventually learns from his mistakes (better late than never), and he's ultimately driven by a deep empathy for others.

Hemsworth's generosity as an actor is evident in how he depicts Thor's emotional rollercoaster in response to seeing Jane wielding a reconstituted Mjölnir as the new God of Thunder, from his slight insecurity over how well she handles his old hammer and role, to clinging protectively to her when he realizes her newfound godly powers are accelerating her decline due to cancer.

Each of Hemsworth's reactions calls attention to the impressive fortitude of Jane as a character, and to how much work Portman is doing under the surface.

Anyone who's watched a loved one die slowly of cancer can relate to Thor's admittedly selfish desire to keep Jane alive and well for as long as possible, even as she tells him that she'd rather have a shorter life spent doing what she wants, rather than devoted to treatments that might buy her a few more months at most.

Of course, as both the midcredits and end credits scenes of this film serve to highlight, in a fictional universe where literal gods are a proven fact, death and the afterlife are less final barriers than merely another set of destinations and states of being.

"Thor: Love & Thunder" rolls open with the endearing but exhausting enthusiasm of a kindergarten kid describing his favorite Ninja Turtles, but Waititi manages to settle down and wrap up his fractured fairy tale by achieving a thematic balance between punchlines and genuinely felt familial sentiments.

I hope this isn't the last we've seen of Omnipotence City onscreen, and this film's final cameo appearance is going to gratify a lot of Marvel fans (and I'm guessing Tatiana Maslany's soon-to-debut She-Hulk on Disney+).