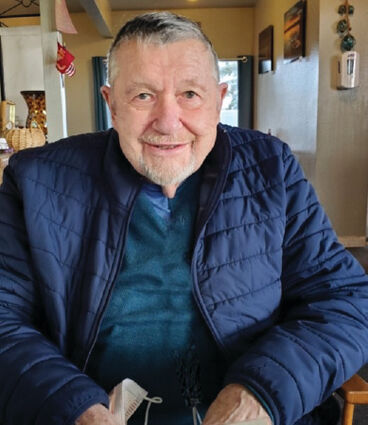 Lyn Fish, age 79, passed away at home on Harstine Island on April 6, 2022, after a courageous battle with cancer, with his wife and niece at his side.

Lyn was born in Eureka, CA, to parents Lila and Ralph Fish, the youngest of six brothers, all of whom served in the military. He wed his wife Billie in January 1969, and and together with daughter Pamela, they were a family until Billie passed away unexpectedly in October 2012.

After his beloved wife Billie passed, Lyn was blessed to find love again, and surrounded by loving family and friends, married Jill Stubberfield in a private ceremony on the island in February 2017. The two spent countless hours enjoying some of their favorite things including picnics on the beach, trips to Westport, WA, gardening, cooking and just being happy together. Lyn's new family included pup Eddie and two kitties, Willie and Timmy, who always kept things interesting.

Lyn served in the United States Air Force as a C-141 Flight Engineer, where he retired as a Senior Master Sergeant after 28 years. He later worked for Boeing as an aircraft inspector on the B-757 aircraft. His pals in the military always referred to him as "Fish", which, after aviation, was his other favorite passion, "FISH-ing!"

A man of incredible faith and a servant of the Lord, Lyn's retirement years were spent in service to others. He was a formidable force in the kitchen at LaJune Senior Lunches, he was instrumental in getting the newly built Bridge Church building set up, and helped establish the Pioneer Food Bank, and spent many hours chauffeuring island residents to and from doctors and medical appointments.

Lyn was a simple, humble and happy man and was fortunate to have had two families and two careers that he loved. Known for his kindness and humor, his smiling face will be missed by many here on earth, but we know that he is with God now.

In addition to his wife Jill, he is survived by his daughter Pamela Moore of Harstine Island, Jill's son Mark, and daughter-in-law Kat of San Jose, CA as well as two brothers, Frank Fish of Cowgill, MO and Richard Fish of Fair Oaks, CA., Wade, Harvey and Elbert Hamrick, who Lyn also considered his brothers, his beloved nieces, Debbie Ransom of Shelton, WA and Terri Hamrick-Oeschger and numerous relatives of the Fish, Stubberfield and Hamrick families.