The morel of the story 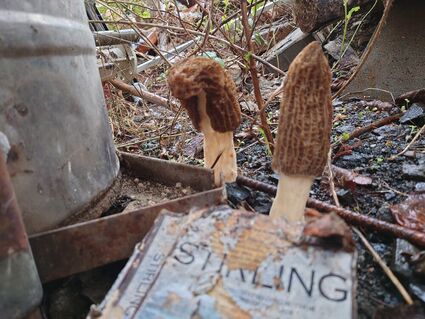 A mushroom that loves fire grows between a blast furnace and a book about the world burning down.

There were a lot of reasons to loathe 2020. Round here, a huge flush of morels wasn't one of them.

Kale volunteers were popping up in the spring garlic beds. The garlic had been planted in fall in Creation Organics' 60 rotted manure/30 peat/10 sand mixture. The whole had been covered with rotted alder chips and cardboard.

I was weeding the kale out of the beds when I noticed a morel growing with the garlic. Suddenly I realized there were several.

An hour later it was clear that five raised beds were shot through with morels. There was such rejoicing, you'd think it was the second coming.

Morels have more than an unbelievably rich earthy taste. Their crazy tapered-hollow-brain look makes them a favorite wild food texture. They dry well, cook well by themselves or offer a lot to dishes, like crab and morel risotto.

It was the greatest wild mushroom find of my time in South Sound, and I've had not a few. The volume was too large even to process and slugs took more than their share. Their most charming conquest was crawling up the inside of the hollow stem to live inside the morel while eating it, increasingly marinating themselves in poop.

Spring 2021's brainy shapes in the raised beds had me thinking I'd get morels every year. Imagine my dismay when I found out they were the handsome but inedible elfin saddle mushroom. I'm not knocking the elfin saddle, though; I'm sure I'll learn fine things about it some day.

Thinking lightning doesn't strike twice, I didn't look for morels at all in 2022. I was gobsmacked when they turned up hundreds of feet from the raised beds where they'd flourished previously, and in the unbelievably inhospitable conditions of the graveled driveway.

Beside my homemade waste oil-burning blast furnace and a book a friend had lent me before leaving New York City, two morels the size of baby arms were growing. I didn't know they could get that big.

There was a poetry to this experience: morels often grow in recently burned disturbed forest edges. These two mushrooms were framed by a blast furnace and the book was called "Dies the Fire," which is a classic post-apocalypse novel about an EMP-like condition throwing the entire world into a dark age without electricity and chemical combustion.

When I was done laughing at that splendid universal joke and taking a picture to send H., who had given me the book, I found several more morels scattered over a 300-foot radius. The soil types and conditions varied, having only in common that they are all inhospitable.

I have never used pesticides, fungicides or herbicides on my property. I can't trust experts that there won't be undesirable effects - given how many times the science has been wrong.

I've integrated a lot of charcoal into this soil, have liberally used wood chips (alder, willow, cherry, cascara, hazel) and occasionally added manures. A friend with a small homestead outside Olympia said she had seen morels growing in a clearing among alder where cattle grazed.

It seems something about fire, manure and alder create the conditions morels love. But that's the magic of mushrooms: most of them are impossible to domesticate.

Scientific Western study of mushrooms is just over a century old. Gaping chasms of ignorance are loosely bordered by a taxonomy that changes frequently. It was only recently that researchers figured out mushrooms are more closely related to animals than plants. (Vegans, consider the lacunae of your dogma.)

I can't know what I did to occasion recurring morels. I'll go on listening to the land as closely as possible and taking the small slow steps that invite surprise wonders.

■ Alex Féthière has lived on Harstine Island long enough to forget New York City, where he built community gardens and double-dug his suburban sod into a victory garden. He can be reached at [email protected]