Rising from the rubble: Impressions of Raymond 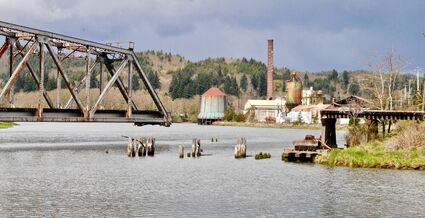 The end of a turnstile railway bridge, left, and the tracks, opposite, will never again meet as the industrial waterfront of Raymond undergoes a transformation away from its logging past.

Some of my best days are days when I travel. And the best of my traveling days always seem to be those times when I talk to locals and ask them something about the place where they live.

I've noticed that if I do this one thing right - that is, engage with the locals - I am "off to the races," as the expression goes, and having the time of my life as I gather all sorts of first-person information about the places I visit.

No tourist map or guidebook comes close to this. No guidebook is going to buy you dinner or another round of beers, either.

Even if no one buys you anything, you feel as though you are walking on air because the magic of meeting the locals comes from showing a sincere interest in the lives of others, and in turn you inspire those others to be at their best as well. Total strangers will pour out a wealth of stories and information if they sense that you are a person ready to hear them. (Volunteers at visitor centers trade in this form of commerce, passing on tips and recommendations that only locals would know.)

If you can show someone that you accept them for being just the way they are, you are likely to come away with that most fantastic of all treasures: their truth.

The truth is how we learn a sweet woman of about 25 is not too impressed with her rental house.

We are on a Washington coast April adventure, dark clouds and storm fronts chasing us relentlessly. Rain passes in bands then the sun roars back from behind, on and off all day.

As we pass the McDonald's and Thriftway on our way out of Raymond, swinging south on U.S. Highway 101, the old industrial remnants of a long-gone sawmill catch my eye.

As with parts of Aberdeen, Cosmopolis and Hoquiam, the decaying infrastructure of the early-1900s logging industry keeps my attention like a wreck on the highway, or, more accurately, like the aging, frail monuments of a Civil War battlefield.

I am fascinated by the force of conquest these old mills represent, how the Pacific Northwest was changed by men pursuing trees. (Or as author Edwin Van Syckle says unflinchingly in the title of his 1981 book, "They Tried to Cut It All").

Raymond was one of America's biggest logging and milling centers for nearly a century. Active pockets of milling remain, but much of the original waterfront mill structures are gone, chunked in scraps, or still whole but abandoned, as is the iron swinging railway bridge that once turned in the middle of the river so trains hauling trees could cross to the mill.

The woman, the rental

We pull off the road to take photos and notice the woman has just come out of her house and is tossing an orange plastic ball for her short-haired pug dog to chase. In her front yard, a "For Sale" sign on two chains swings in the wind.

Nearby, a row of modern, three-story, expensive-looking condos hugs the banks of the slough. The woman's house is new, too, though completely isolated on a low gravel lot that stretches to the fences of the abandoned mill.

"Wow, what a place you have here," I say in a most positive tone, though I can see some shortcomings for being smack-dab in the middle of an industrial graveyard.

"Naw, it's not so nice," she replies, pulling the ball from her pug's huffing jaws. "We're on a flood plain. We had three king tides this year and the whole house was under water. I had to jump over that guardrail over there to get my stuff, and practically swim to my front door."

I told her this was the kind of place artists like.

"Maybe, but I'm no artist," she replies, giving me a bewildered look. "I'm not sure I'd like getting all my stuff ruined even if I was."

She flings the ball off the end of a plastic catapult, sending it high toward the rusty mill. Linda and I are both surprised how fast the little pug races across the gravel lot. He's like a bowling ball whizzing by.

Somehow we get to the subject of the young woman's boyfriend, whom we discover is the new owner of Sheila's, the restaurant in Raymond where we had eaten only an hour before.

"As a matter of fact, the waiter dropped our food on the floor. He only told us after we waited 20 minutes."

"Not surprised," the woman says. "Sheila, the owner, was my boyfriend's mother. She just died. Now he's running the whole show and is trying to figure it out. He needs to replace his cook, and that's not going to be easy. Everybody is hurting to get good help around here."

We part ways and continue down the road. Abandoned mills are soon replaced by vacant warehouses and canneries, casualties of a South Bend oyster industry that has also seen changes.

With a stab of double irony, I photograph a sign on one giant, empty building: "Welcome to the Oyster Capital of the World," where the only economic activity is a tiny fish-and-chips food truck putting up its doors against a coming storm.

Later, more truth as we hear from the locals drinking at the Dock of the Bay tavern in Bay Center. I ask four guys at the bar if marijuana growing was now the big business in South Bend.

"Surprised you didn't smell the money all along town," says the man nearest me. "They've got the warehouses going again."

I share my impressions of the old mills and the railway bridge frozen open in the middle of the river.

"I used to operate that bridge," says a bearded man at a table. "If the power went out, God forgive you, you had to turn it with a hand crank."

"I used to jump off that bridge, swimming," laughs a younger guy along the bar.

Pieces of a town, pieces of the lives who've worked, loved and lived there - all kinds of pieces come flooding your way when you open yourself to strangers on the road.

We pay up at the Dock of the Bay. But first I learn how to fix my lawnmower from Rob, a guy who's spent his whole life grading lumber. Nearing retirement, now he's teaching computer geeks how to train a machine to do the same job.

■ Mark Woytowich is a writer, photographer, video producer and author of "Where Waterfalls and Wild Things Are." He lives in Potlatch with his wife, Linda. His "On the Go" column appears every other week in the Journal. Reach him at his website, http://www.wherewaterfallsare.com, or by email at [email protected]