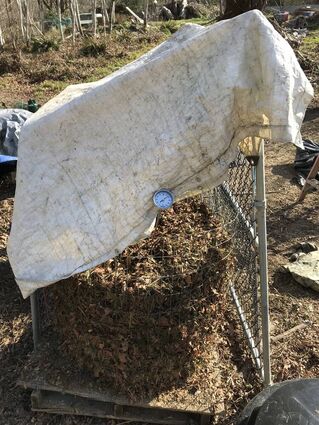 This kennel panel frame keeps a shed roof of tarp over the compost heaps for air circulation with rain protection.

The title of this column doesn't refer to spring. That's still a month off, and this week's night freezes remind us that winter didn't drop its whole payload in December.

I'm talking about compost becoming hotter and more active. That's been happening to an unprecedented degree - only to lose its momentum at a critical time.

It was thrilling when Pile A, the construction of which I documented in the Journal's Real Estate Guide published last week, reached 160 degrees. But the directions I had given while composting that pile turned out to be wanting: there was not enough high-nitrogen content to raise the pile's temperature past 126 degrees over five days.

Gauging how much high-nitrogen bacterial food (e.g., blood meal, spent brewery grains, chicken manure) to use must account for the only variable we can't control: ambient temperature. A pile size of 3-feet-by-3-feet will provide adequate insulation for a hot (131-degree plus) center in most South Sound seasons, and well water should be heated to at least ambient temperature.

Forgetting that, I had used well water sprayed directly on the ingredients as I mixed the pile. The temperature the pile ultimately reaches, however, is more a reflection of correct composition; more high nitrogen will compensate for colder weather.

After Pile A failed to reach a temperature that would kill weed seeds and harmful microbes, my coursework says you can attempt to jump-start it with more high nitrogen and more greens (kitchen waste, mown weeds, etc.) distributed over the dome of the center. I added three 5-gallon buckets of chicken bedding, half of a bucket of kitchen waste mixed with two buckets of mown weeds, and a pound of blood meal, the whole dampened to 50% moisture (you can squeeze out two to three drops from a handful) with 95-degree water.

When this failed to rejuvenate the bacteria, I started a second pile, Pile B, and dismantled Pile A to stir five buckets of spent brewery grain into it. I had written it off at that point - if the temperature dips below 131 for 24 hours, undesirable microbes can recover. The pile should then be scrapped and treated as browns (carbon material: leaves, woodchips, cardboard) to feed a new pile, but I thought I'd try an experiment with some extra spent grains.

The next day, the 4-foot compost thermometer showed 150 degrees, and the following day it read 162. We were off to the races!

When I turned that pile after 48 hours, its anatomy was fascinating. The top was pretty hot, so it was hard to tell where the middle was.

There was a thin skimming of white frosting the inner top. These actinobacteria grow in reduced oxygen (less than 6.5 parts per million) conditions. A faint smell of ammonia in the copious steam told me the center hadn't been getting enough air.

Later I realized that I'd tarped the pile too enthusiastically. It should be wearing a cowboy hat of tarp, not a spacesuit. Air must circulate, so I contrived the panel box in the picture.

The bottom of Pile A had compacted from the weight and showed a few actinobacteria colonies as well. It never recovered from the turning, losing a full 60 degrees of heat and only heating to 120 after two days before dropping.

Pile B shows the lessons learned, having been built around spent grains. It reached 134 on Day 6 and has maintained its core temperature through freezing nights. Its green component, almost entirely mown weeds, is sustaining only such a modest temperature because it lacks nitrogen.

The next pile will have more kitchen waste and coffee grounds in it so that when the spent grains work the bacterial populations up to generating a higher temperature, there will be a buffet to maintain them once the spread of snack foods has burned off. Keep careful notes on what works when, and we can craft recipes around the seasons for compost that builds soil year-round.

■ Alex Féthière has lived on Harstine Island long enough to forget New York City, where he built community gardens and double-dug his suburban sod into a victory garden. He can be reached at [email protected]