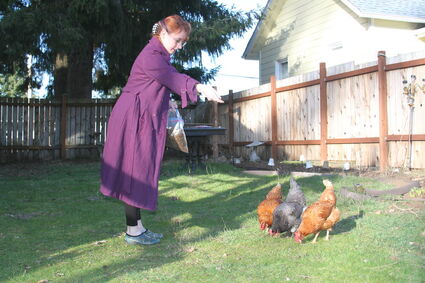 Shelton resident Sarah Stone feeds her three hens Monday in the backyard of her home in the Mountainview district. She shares their eggs with neighbors. "You take your food in at night and they don't attract rats," she said.

City of Shelton residents would be allowed a maximum of five hens and no roosters in a proposed animal ordinance.

The Shelton City Council gave preliminary approval to new animal ordinances at its Feb. 15 meeting. The council can vote for final approval at its meeting at 6 p.m. March 1. People are invited to share their comments during the Zoom meeting. The link can be found on the city's website.

Under the proposed ordinance, residents in neighborhoods on land between 5,000 and 43,559 square feet - 1 foot shy of an acre - would be allowed a maximum of five hens and no roosters. Chicken coo...