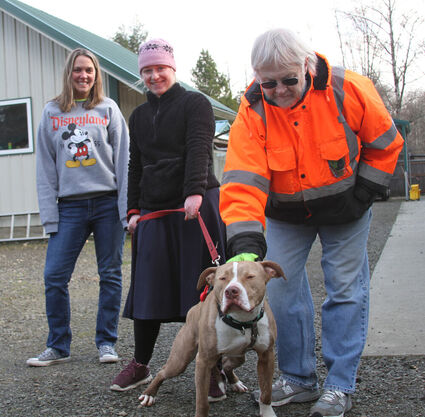 Adopt-A-Pet of Shelton volunteers, from left, Cicely Conklin, Emily Lanning and Dan Hawlins on Tuesday walk Thorn the pit bull at the shelter. The City of Shelton has contracted with Adopt-A-Pet to accept unclaimed shelter animals and care for them while they arrange for pet adoption.

The City of Shelton has contracted with Adopt-A-Pet of Shelton to accept unclaimed shelter animals and care for them while they arrange for pet adoption.

The Shelton City Council made the deal official with a unanimous vote at its Feb. 15 meeting.

The city report states the agreement allows Shelton's animal shelter to be a short-term holding facility pending transfer to Adopt-A-Pet, a nonprofit with a shelter on East Jensen Road north of Shelton. The city will pay the organization $200 per dog.

The deal is similar to the city's agreement with the Kitsap Humane Society, which was arranged a year ago, Beason said.

"Adopt-A-Pet is a closer option to us than the Kitsap County Humane Society," she said.

"We're very excited," kennel manager Di Agee said in an interview with the Journal. "We've worked with the City of Shelton animal control and dog pound for a very long time ... We have a really good partnership with them. This is their facility too."

The shelter is a nonprofit run entirely by volunteers, so the funding is welcome, Agee said.

In 1979, seven people started the grassroots organization with a homemade kennel. The group became Adopt-A-Pet in 1983 and constructed their current facility on East Jensen Road in the early 2000s. The capacity is 40 dogs, and the facility has been full for about five years, Agee said.

Volunteers staff the shelter seven days a week. All dogs are spayed or neutered and chipped before they are sold. Volunteers regularly walk the dogs, including along the adjoining Johns Creek.