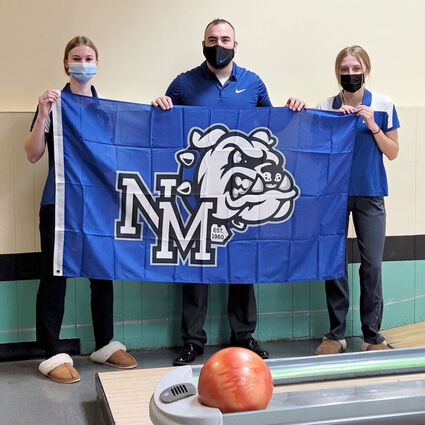 North Mason High School's Sarah Pruitt, left, and Isabella Oblizalo hold up a Bulldog flag Saturday in Parkland with coach Rob Thomas after qualifying for the 2A state meet.

North Mason's Isabella Oblizalo and Sarah Pruitt qualified for the state bowling tournament after competing at the district tournament Jan. 29 at Paradise Lanes in Parkland.

The end of the season has been interesting for the Bulldogs after being unable to participate in the league tournament due to COVID-19.

"We thought our season was going to be over as the league tournament determines who advances to districts," North Mason coach Rob Thomas said in an email to the Journal. "The Olympic League decided that was going to be unfair and voted to allow three of our girls in to compete as indi...