New Shelton mayor 'the face of the city' 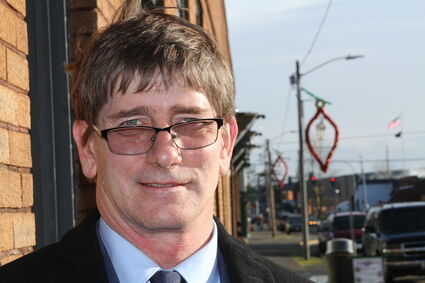 Eric Onisko, the 54-year-old owner of the Hillcrest Shell and Bayshore Texaco, is the new mayor of Shelton.

The new mayor of Shelton said he sees his role as being "the face of the city."

At the Jan. 4 Shelton City Council meeting, Eric Onisko was elected to be the new mayor by a 5-2 vote, with Joe Schmit receiving two votes. Onisko and Schmit were among the four council members sworn in for four-year terms earlier that evening.

This is the second term for the 54-year-old Onisko, who owns the Hillcrest Shell and the Bayshore Texaco.

"I think we work well together, and we have nowhere to go but up," Onisko said of the seven-person council in an interview with the Journal.

Homelessness and the lack of housing are the biggest challenges facing the city, Onisko said. Businesses won't want to invest in Shelton if their employees have to commute 50 miles to work, he said.

Onisko was born in Pasadena, California, and grew up in Southern California. When he was 10 years old in 1977, he moved to Timber Lakes in Mason County, where his grandmother lived.

Onosko worked for 10 years in hotel management, and then managed a convenience store. He purchased his first store in 2009 in Mason County, which he sold. He then purchased his current two stores.

Onisko ran unsuccessfully in 2018 for what was then the three-member Shelton City Commission. He won a seat on the expanded seven-member council in 2018.

Onisko said he was stunned at his first meeting to hear the city was $4.7 million in the red. "That was an eye-opener for us," he said.

The halting of discretionary spending took care of that deficit, Onisko said. The new mayor said the hiring of City Manager Jeff Niten is the highlight of his first four years on the council.

Schmit joined the council alongside Onisko four years ago, and was also re-elected in November. Although he was also nominated to be the mayor and received two votes, Schmit voted for Onisko.

"I am thankful for his willingness to serve and excited to see him excel in this role," Schmit wrote in an email to the Journal.

"Eric is one of Shelton's most compassionate council members," Schmit wrote. "He dedicates a considerable amount of time to public service. He isn't afraid to speak up and defend the interests of our community. There is a tremendous amount of heart in just about everything Eric does. We don't agree on everything, (we're) sometimes at opposite ends of the spectrum when issues arise. Having differing views and opinions causes us to stop and think, to challenge the ways we've always done it, and break down problems, ultimately forging pathways forward."

Council member Deidre Peterson said she knew Onisko as a business owner, Shelton-Mason County Chamber of Commerce member and community supporter before they both joined the council.

"He brings that perspective to the table for each and every conversation," Peterson wrote, "He is also compassionate in his approach and readily available to those who wish to discuss the happenings in local government. I have found Eric to be diligent in his duties and conscientious to understand the details of city programs, budget, proposals, etc. I am eager to work with him, as the newly elected mayor, together with the entire council to tackle issues that will improve our community and the quality of life for our neighbors."