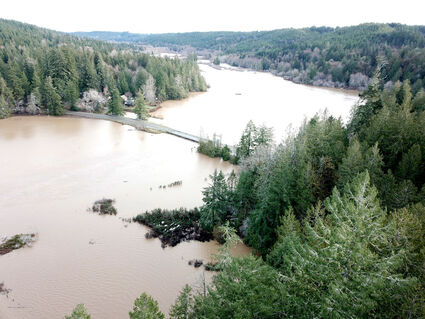 The engorged Tahuya River passes under the Tahuya River Bridge on Northshore Road on Friday. More than 5.5 inches of rain fell on top of snow in parts of Mason County, causing widespread flooding in some areas.

Rain gauges at Sanderson Field in Shelton recorded 5.54 inches of rain in a 48-hour period that ended at 3:53 a.m. Friday.

On the Tahuya Peninsula, the swollen Tahuya River and other streams and tributaries inundated roads, land and homes. Northshore Road was closed briefly.

"North Mason experienced a significant rainfall event Thursday and Friday in which over 3 inches of rain was dumped on the region," North Mason Regional Fire Authority Ch...