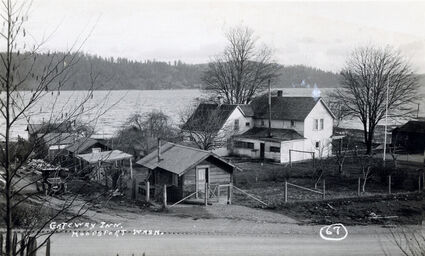 The Gateway Inn and Cabins in Hoodsport during the 1930s was the spring and summer headquarters for Ed Ricketts, a marine biologist and one of John Steinbeck's best friends. He was the inspiration for the character "Doc" in Steinbeck's novel "Cannery Row."

Did one of the country's greatest novelists, John Steinbeck, spend a week in Hoodsport during the 1940s?

And did a Hoodsport logger named Ernie Dahman teach the author of "Grapes of Wrath," "Of Mice and Men" and "Cannery Row" how to shoot a gun?

The answers to these questions are "holy grails" to Gig Harbor historian Michael Kenneth Hemp, author of "Cannery Row: The History of John Steinbeck's Old Ocean View Avenue and Its Connections to the Pacific Northwest."

"That's the crucial part of it now," Hemp said in an interview with the Journal.

He added, "I'm trying to build a new factual histo...