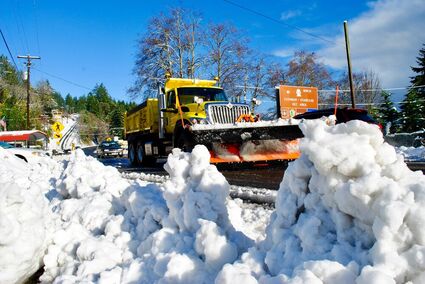 A state Department of Transportation snowplow clears snow off U.S. Highway 101 in Hoodsport. More than 6 inches of snow fell in the northern portions of the county Sunday, causing widespread power outages and road closures.

The most disruptive effect was the closure of a 50-mile stretch of U.S. Highway 101 from Hoodsport to state Route 104 due to downed trees and power lines. The road closed at 9:20 Sunday night and had yet to fully reopen as of Tuesday afternoon.

State Route 119 from Hoodsport to Lake Cushman also was closed most of Monday.

"We had an extreme weather event on the canal in the last 24 hours. Lots of snow and really high wind gusts," Mason County PUD1 General Manager Kristin Masteller wrote in an email to the Journal. "There's been a lot of damage to our system mainly on the north end into Jefferson County, but all the way down the canal to the Skokomish Valley and Union. We've called in mutual aid crews from neighboring utilities and they are helping us ... get caught up."

While the southern end of the county was spared the storm's worst effects, areas from the southern shores of Hood Canal north to Jefferson and Kitsap counties weren't as lucky.

Nearly every home in the Lake Cushman area lost power for several hours Sunday night, as did most of the communities on the western shores of Hood Canal from Lilliwaup to Brinnon. On the east side of the canal, Tahuya and Dewatto experienced outages.

"We are very proud of our team for working through the night to restore power to customers in the most awful weather and road conditions," Mason County PUD3 General Manager Annette Creekpaum wrote in a released statement. "One of our crews working on the Tahuya peninsula wrote in that they had to clear multiple trees from the roads just to get access to the downed lines. His exact words were 'we're fighting everything at the moment, no ETR (estimated time to recovery.)' "

Lynn Eaton, PUD3's communications manager, estimated more than 40 people from the utility were involved in the storm's response.

"While our crews are used to working in adverse conditions and the utility usually sees at least one 'bad' storm per year, this storm proved to be especially challenging due to the quick snow melt," Creekpaum wrote. "It not only caused trees to fall due to saturated roots but brought down heavy limbs into lines as well as made driving and working conditions a total mess."

A particular challenge for restoring the power for both utilities was "cold load pickup," which, according to Creekpaum, is "a problem that occurs when trying to re-energize a line during cold conditions and it won't hold because there is too much load for the lines to heat up slowly."

Customers are asked to wait about 30 minutes after power is restored before turning on electric heaters and other power-intense devices to give the system an opportunity to balance the power load.

Masteller praised her utility's teamwork during the event.

"The great thing about PUD 1 is that when things go down, everybody pitches in to help," Masteller wrote. "Engineers are answering the phones for customer service at 4 a.m. Water crew members are cutting trees out of the highway and plowing snow so the line trucks can get through without impairment. Office personnel are running equipment out to the crew so they don't have to stop working and come back to load up. It's been a full-court press for the last 12 hours and will keep at it until everybody's back on."

In addition to the PUDs, crews from the state Department of Transportation, Mason County Public Works and City of Shelton Public Works were engaged in clearing roads and keeping other utilities running since the first snow began falling Christmas Day.

Conditions also forced Mason County Garbage and Recycling to suspend pickup for many customers for more than a week, leaving many garbage containers overfilled. 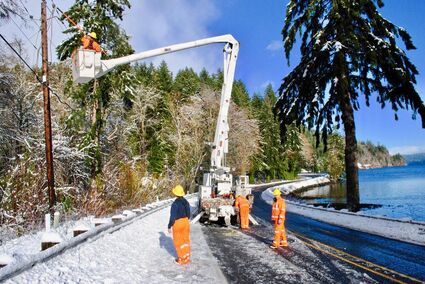 A notice on the company's website said it was back running service routes on Monday, road conditions permitting.

The notice added that "Under our tariff from the Washington state Department of Utilities and Transportation, pickups may be missed due to weather or road conditions. If the accumulated material (solid waste or recyclables) is collected on the next scheduled or available pickup date, the company is not obligated to extend credit for the missed pickup. Customers will not be charged for overfilled containers or for additional material in bags placed next to the normal container provided the extra does not exceed a reasonable amount due to the missed pickup."

Most of the county's seven school districts were closed Monday and all closed due to road conditions Tuesday. The closures also affected sports and extracurricular activities at the schools.