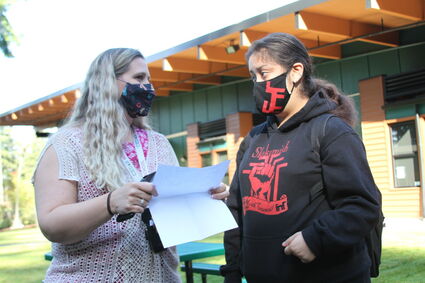 In September, Cedar High School Principal Amber Hosford answers a question from junior Tatyana Leclair-Hernandez on the grounds of the school's new home on the Olympic College Shelton campus. The Shelton School District plans to begin recruiting employees in February for the 2022-2023 school year.

The Shelton School District plans to begin recruiting employees for the 2022-2023 school year in February, a few months earlier than usual.

"We'll know what we're doing early on, and that's going to make such a huge difference, I believe, in the quality of people we'll get," Linda Arnold, the district's executive director of human resources, said at the Shelton School Board's Dec. 14 meeting.

Arnold added, "The crux of this (hiring) was happening during the summer, and it stymied us, because by then, other districts had taken candidates that might have been awesome for the Shelton School District, so we're months ahead with this timeline ... This is the perfect timing for our hiring process."

Hiring personnel earlier is one of the district's goals, said Superintendent Wyatt Jessee. When he was hired to replace Alex Apostle, many stakeholders asked him, "Can you hire earlier?" he said.

The district will be better able to recruit, hire and train quality employees who meet the district's standards, Jessee said.

At the Dec. 14 meeting, Arnold and Brenda Trogstad, the district's finance director, detailed the timeline for staffing and budgeting for the 2022-2023 school year.

The district is already working on projecting student enrollments for the next school year, even though its deadline isn't until Jan. 31, Trogstad said.

The district's timeline continues with the enrollment projections converted to staff allocations by Feb. 15, the posting of general job positions on Feb. 21, and the distribution of budget and staffing allocations to schools Feb. 23.

The district will offer contingency plans for returning employees, which Arnold said it hadn't done during her tenure. Usually, about 15% of certified staff members leave the district at the end of the school year, she said.

Between Feb. 23 and March 10, school leadership teams will gather to hear requests from staff members for a change in status, including resignations, reassignments and requests for new positions.

All budget and staffing plans are scheduled to be posted by March 18, and individual positions posted March 21. The school board will participate in two study sessions on the budget between April 1 and July 10. Between June 10 and Aug. 3, the district's human resources department will publish a weekly report on open positions. School leaders and department heads will be responsible for screening, interviewing and hiring employees.

At the meeting, Superintendent Jessee also announced that the district is fully staffed for bus drivers and all routes are being covered.