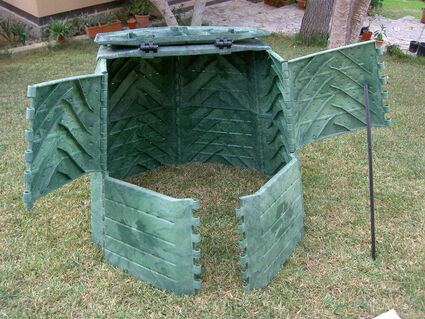 This composter allows you to measure temperature and easily access layers for shuffling.

Composting is one of the mysteries that my soil science course is revealing. I've been making good enough compost for years without a bum batch. Still, my objective has been to eliminate kitchen scraps - and reduce garbage - as much as it's been to enrich the soil.

That spirit of waste disposal, as opposed to soil enrichment, has degraded the compost industry. The compost produced by shredded woody material carelessly mixed with various biodegradable materials might visually resemble proper compost, but only superficially.

On closer inspection, the smell (rotten) and texture (slimy with chunks) will tell you all you need to know. This "reduced waste" has fostered anaerobic organisms at some point and contains them, their waste products and their dormant reproductive units. It has also incompletely rendered the feedstocks that constitute it, and their continued digestion will harm your plants and foster detrimental biology.

As if that weren't enough, anaerobic decomposition also emits greenhouse gases. All rot produces carbon dioxide, but only decay in the absence of oxygen also produces nitrous oxide, hydrogen sulfide, ammonia and methane.

This kind of compost had agronomists recommending people steer clear of it a few decades ago and is still the bugaboo of home compost producers. The key to avoiding it is carefully selecting starting materials and turning them an appropriate number of times.

The USDA's regulations for turning compost are also informed by waste disposal. They direct that compost be maintained at a temperature of 131 degrees Fahrenheit for 15 days, during which it is turned five times.

Turning too many times can cool the pile below the temperatures required to kill undesirable organisms. Decay may reduce the volume of waste, but only cycling of organic material by aerobic micro-critters will produce viable compost.

These are not encouraged by production per the USDA, concerned as it is only with temperatures and turning regimes. Compost that contains beneficial bacteria, fungi, protozoa, nematodes and perhaps even microarthropods should be produced with select feedstocks at steady temperatures and a regime of three turns.

By "turns" I do not mean vertical churnings with an auger, as I advocated last year. This method aerates the pile, but I have learned that it macerates fungal hyphae. Healthy fungal populations are particularly desirable if we are using compost to feed trees and perennials.

The composter pictured is particularly suited to our climate and the turning method recommended by soil scientist Elaine Ingham. It opens at all levels, but protects the contents from the excessive rain that would stymie the process and leach the product. I have yet to find one in this country; this is produced by a Spanish company.

Harmful organisms will be killed if the center of the pile is maintained at more than 131F for 72 hours, over 150F for 48 hours, or above 165F for 24 hours. When each cycle completes, the pile is "turned."

This careful operation is more like a shuffling than a turning. First the wireframe, casing or composter that holds the pile in place is moved over within pitchfork's reach.

Using a compost thermometer, the center of the pile is determined by its temperature. The cooler materials (the "top") above it are removed to a tarp, where any clumps are broken up to let air in.

The hot center is moved to the bottom of the composter's new location, loosened enough to disaggregate clusters, and spread into a bowl-like shape. The top is placed on that to become the new center, and what was formerly the bottom is spread over that as the new top and sides.

Expect to lose more than 15 degrees of heat in this process. Once the pile has reached at least 131 degrees again, monitor the temperature for the appropriate interval and repeat until all material has changed position once.

Next week we can examine feedstocks, water content and recommended ratios. Let's hope we'll find some refuse to reuse!