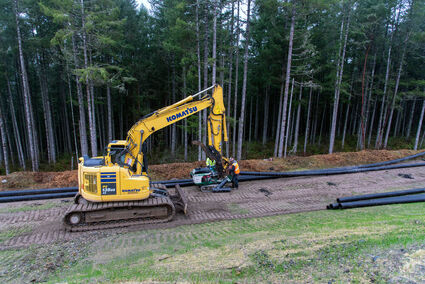 Crews work on a section of the Belfair Sewer Project behind the Olympic Ridge complex on Monday in Belfair.

Mason County Public Works plans to solicit bids this month for the next phase of the Belfair Sewer project a project that has cost the county millions with a long and tumultuous history that is making progress toward completion.

At the Nov. 22 Mason County commissioners meeting, Belfair Sewer project manager Michael Lubovich said during a briefing on the sewer that the project's next phase is a significant milestone.

He said the original concept for the project was to find a way to join with local agencies and run a sewer line parallel to the planned state Route 3 freight corridor - previously known as the Belfair Bypass - to bring in more customers, more flow and more service into the Belfair Water Reclamation facility. Interlocal agreements were made among Mason County, Bremerton and the Port of Bremerton to explore the project and its benefits.

Lubovich said the goals for Mason County in this project are to explore the interest for stakeholders to connect to Mason County's Belfair Water Reclamation facility and to maximize the facility's existing capacity.

Kennedy Jenks, the contractor working on the upcoming project, looked at several options for the construction and settled on an option that provides the most operational flexibility, including having construction being phased in, which will serve near-term planned development, according to Lubovich. The project is going out to bid this month and it includes an extension from Belfair's post office up to the Olympic Ridge developments, crosses the Navy's railroad tracks and goes up to the urban growth area to the northeast portion of the county, but stays south of state Route 3.

Lubovich said estimates for phase one of the project are $4.7 to 5.7 million, with an anticipated bid cost of $3.7 to $4.5 million due to another company that's building a portion of the line at the Olympic Ridge development due to a different construction timeline for that project.

The anticipated timeline for construction is to award the bid in January, have a contractor notice to proceed in March and have substantial completion anticipated by February 2023.

The Belfair Water Reclamation Facility was completed in 2012 and was designed for the Belfair urban growth area. It cost $42 million. Sixty-one percent of that cost was covered by grants and the remainder was paid through a loan. The loan amount on the facility was $16.4 million, and the loans are expected to be paid off by 2032, according to Mason County Public Works Director Loretta Swanson.

Swanson said the project fell short of the expected number of connections after connecting people along the main collection system. The projected growth within the urban growth area was expected to help offset some of the costs of the project but the growth didn't occur, in part due to the recession from 2007 to 2009.

Loan payments are being paid through the Real Estate Excise Tax and the 0.09 sales tax. Swanson said the county has been successful in asking the Legislature for rate relief and said the commissioners have made changes within the past few years to make construction easier for developers in Belfair to help spur growth.

Swanson said the county is working in cooperation with the Port of Bremerton and the city of Bremerton to consider whether it makes sense to send flows to the Belfair facility.

"Their interest in that is that's right there on the city of Bremerton-Mason County border. Their utilities are all quite a ways away farther north and it would be very costly to extend city services down to serve that southern area of Puget Sound Industrial Center," Swanson said. "The other option would be to actually construct a new plant down there and so that's what their interest was. They figured it's going to be really costly to construct a new plant or extend services, let's take a look about what the cost-effectiveness is to tie into the Belfair facility."

Swanson said the Port of Bremerton has an existing system to serve the properties, but at some point, they will not have capacity to serve tenants. She said the line does not go into Bremerton or leave Mason County and goes to about Log Yard Road. Any connection into that line would be an extension from Bremerton.

"It's completely within Mason County limits," Swanson said. "Nothing goes outside of Mason County limits. The design and the planning anticipated future phases so that line is sized to be able to accept some other flows. You've got to think about all those things. There's a little bit of upsizing in thinking about taking additional flows. ... In talking with the city, they aren't anticipating any immediate development so that was part of the reason for thinking of phasing this project is that it wouldn't make sense to construct the later phases now because they'd just be sitting there not utilized."

Swanson said the biggest issue for the project has been the lack of new growth throughout the past few years. The initial plan was also to build along the Route 3 freight corridor, but that project won't start until spring 2024. The county decided to move ahead of that project.

Commissioner Randy Neatherlin said he became a commissioner because of the sewer, saying it crushed Belfair when it first started because the price was supposed to be $14 million but ended up costing $54 million.

Neatherlin said the Belfair Sewer opened with 428 ERUs (equivalent residential units) and after two years, it went down to 411 ERUs, nowhere near the 7% growth per year that was projected.

"All the decisions that were made for the sewer in the beginning was only the county, not the citizens" Neatherlin said. "It was an undue burden and then it's turned out to be an undue burden for the whole county because they've had to kick in to pay for it because you can't pay for it with the amount of ERUs that we've had."

He said many residents are upset because they cannot see putting more debt and burden on a system that can't handle the debt now. He said he doesn't see it as a good investment because there aren't enough ERUs to make up the cost of the investment.

"I don't think it's a wise investment and when I say that, I'm telling you that everything I hear, my community doesn't," Neatherlin said. "They've all been bringing it up at the different meetings, they're asking a bunch of questions and were ready to fight it at one point when they thought it was going to be $8 million because eventually, somebody has to pay and it will be this small community and we don't have a lot of homes here. So, if it gets dumped on them, how are they going to survive? We lost a lot of businesses the first time. Even if the county picks it up, is that a wise investment? And that's a question that people are asking in the community."

Neatherlin suggested a community forum on the project. He said he would like to invest in bringing the line under state Route 3 in order to allow residents and businesses that are already there to hook up to the sewer.0

He said phase one of the project is already paid for and this advertisement for bids is for phase two, although in the PowerPoint presentation by Lubovich, a slide stated the bid is for phase one. During the presentation, Neatherlin asked questions of Lubovich and Swanson that will be answered during Monday's commissioners briefing.

Neatherlin said ultimately, he would like the developers to decide where they want to go and then build their own infrastructure, just like what is being done at Olympic Ridge.

"That's how it's supposed to work. When this system was put into place, if you read back on the history, that whole phase was supposed to be developer phase," Neatherlin said. "They had it set up into phases and that phase was phase 3 or 4, not phase 1, phase 2. Phase one was this, phase two was other residential areas, phase three was the other side. Then, I think phase four was up on that hill and it was supposed to be done by developers, not by the county paying for it because they can't afford to make that kind of investment on speculation. We were going to get no money for granting because they don't grant speculation. They grant on people that already have residences. They knew then that it had to be developer so for us to change that now doesn't make much sense because the science is still the same and we can't afford the debt."