A respite from the cold 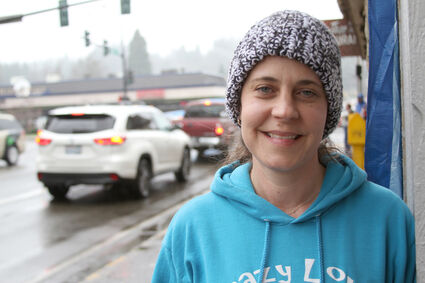 Five years ago, Wendy Petty founded Crazy Love Ministries in Shelton. In March 2020, the nonprofit moved into the former site of the Pine Tree Restaurant and opened a warming center that provides meals and support services, and when available, clothing and hygiene products.

A 20-year addiction to methamphetamine left Jared Lee homeless, sleeping on the streets of Shelton or inside the Community Lifeline shelter.

"You're just surviving, making sure your stuff doesn't get stolen, just trying to keep your head above water," the Tacoma native said.

One Friday night, Lee received a free dinner at Crazy Love Ministries' weekly meal for people on the streets in the parking lot at Consejo Counseling. That's where he met Wendy Petty, who five years ago founded the group.

"I felt like God told me I'd work with Wendy," Lee recalled.

After receiving treatment for his addiction, Lee began volunteering 16 months ago at the nonprofit's Mason County Warming Center at 110 S. First St. in downtown Shelton.

"It's given me purpose, it's given me something to do ... It's really fulfilling," he said.

Crazy Love Ministries' warming center is open from 9 a.m. to noon Tuesday through Saturday, and from 1 to 4 p.m. on Sundays.

People are happy to be off the streets for a few hours and get a hot meal, Petty said. They can shower, wash their clothes, and if they are available, receive clothes and hygiene products. They can work with case managers from Northwest Resources and others.

"We're there to offer support services for those ready for their circumstances to change," Petty said.

Crazy Love Ministries was founded as a street food ministry with a round-the-clock phone line. The group felt it needed a place where the clients could come to warm up and get support services, instead of volunteers going out to the homeless camps, Petty said.

"People were just wanting to spend more time with us," she said.

The warming center opened its doors in March 2020, just as the pandemic hit. The City of Shelton sped up the occupancy permit for that reason, Petty said. The rent is $1,550 a month.

The organization plans to expand into the second half of the building, Petty said.

Crazy Love Ministries served about 30 people on Thanksgiving – but double that the next day, on Friday, so that shows a lot of homeless people don't want to come in the building, Petty said.

Most of the clients live in five homeless camps, and most are in their 40s to 60s, Petty said. They are aware of the city's new law barring camping on city right of ways, she said.

"They'll hunker down under a tarp, and stay on the move to be under the radar," she said.

"Some are floating from town to town ... For housing, Mason County is not the place," she said.

Crazy Love Ministries accepts donations of clothing and hygiene products. The group also helps with the Olympia street feed for homeless, because that group helped them get started their first three months, Petty said.

The 30 or so volunteers include people in recovery, and the environment provides "a family of support for our team members," she said.

Lee said the rewards of volunteering include "serving people, loving people, when people come in ... I know what they're going through."

Crazy Love Ministries is working on a proposed plan for housing local homeless people, which it plans to present in February, Petty said, The organization is open to working with the City of Shelton, Mason County and other nonprofits to establish apartments and tiny homes for people in need, she said.

"Other cities are being really creative," she said. "They're more long-term than tent encampments."